Empa is using imaging spectrometer data acquired by the Airborne Prism Experiment (APEX) to study the distribution of key air pollutants and to obtain detailed information on individual emission sources. APEX is an airborne imaging spectrometer offering a unique opportunity to measure air pollutants with a spatial resolution of a few meters exceeding the resolution of current satellite sensors by several orders of magnitude. 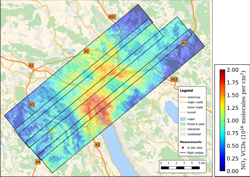 High-resolution NO2 map obtained from APEX measurements over Zurich on August 30th, 2013.

The main objective is the retrieval of NO2 vertical columns between the surface and the aircraft cruise altitude from the spectral radiance information provided by APEX. The NO2 maps are used to characterize the NO2 distribution above selected regions in Switzerland and other locations in Europe. The results are compared to air quality models and validated with ground-based monitoring networks. Furthermore, the retrieval of other air constituents, for example, methane and particulate matter are investigated.

In the long run, the activities will improve remote sensing and modelling of air pollutants and allow environmental monitoring at the scale of cities with remote sensing techniques from aircraft and other platforms in order to support policy makers and as a critical input for epidemiological studies. 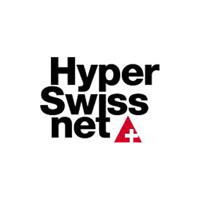 The HyperSwissNet project (2009-2012) aimed at developing and supporting the scientific expertise and infrastructure in Switzerland for the exploitation of imaging spectrometry technology for different Earth observation applications. In this project, we developed the first version of the APEX NO2 retrieval algorithm (Popp et al. 2012).

The project SEON (2014-2017) is a joint competence center project of the Swiss Universities and the ETH domain. SEON's objective is to monitor Swiss ecosystems in a changing environment. In this project, we developed a new in-flight spectral calibration algorithm for APEX (Kuhlmann et al. 2016) and the second version of the APEX NO2 retrieval algorithm.

The MuNIC campaign was a measurement campaign in Munich, Germany, for validation of APEX NO2 and CH4 measurements with intensive ground-based observations together with partners of eight partner institutes.

The project aims to improve aims to estimate high-resolution distributions of near-surface NO2 concentrations by combining NO2 columns from an airborne imaging spectrometer with high-resolution dispersion modelling and three-dimensional radiative transfer modelling.