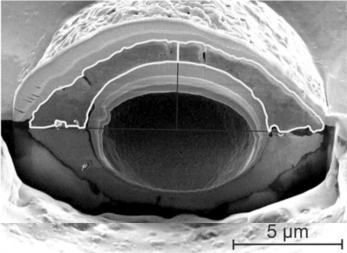 importance of carbonate precipitation by phytoplankton in fresh water lakes has not been sufficiently considered in global carbon cycles and climate change scenarios. The objective of this study was to determine the influence of the calcifying bivalved phytoflagellate Phacotus lenticularis (Ehrenberg) Deising 1866 on the total calcite precipitation in five European hard-water lakes. For this purpose, an accurate mass determination of single Phacotus lenticularis shells was required. We developed a novel methodological approach to precisely determine the volume and mass of the calcified shells. Focused ion beam (FIB) techniques were employed to investigate internal structural features. Thin layer cross-sections of the shell profiles were reproduced and perforation as well as the crystalline structure of the calcite plates were monitored. 3D-shell models were computed by 360° rotation of the shell cross-sections using a CAD 3D imaging software to calculate precise volumes and estimate realistic masses. In contrast to previous estimates, we determined a 2.8-fold higher shell mass of 0.86 ng CaCO3 (SD=0.18) for the highly massive shells at a mean volume per individual of 334.1 μm3 (SD=70). An initial shell porosity of less than 5% was derived from thin layer crosssection images, resulting in a presumed mean shell density of 0.0026 ng μm–3. The shell diameter was significantly influenced by the lake's origin. The shells from each lake displayed substantial variations in diameter and shape. The pores in the shells showed two variations. Wider pore canals penetrated the whole shell wall, whereas small, elongated pores were located along the interspaces between calcite crystals with tabular habit. The approximate average dimensions of these calcite plates were 1.0×1.6×0.2 μm. The mean lateral wall thickness at the rim and centre of the shell were 1.98 μm (SD=0.42) and 0.79 μm (SD=0.17), respectively. The average carbonate precipitation by Phacotus lenticularis in relation to the total epilimnetic suspended calcite precipitation was 6% in the oligotrophic lake Großer Ostersee (Bavaria, Germany). During the growing season, Phacotus lenticularis contributed up to 21% of the particulate calcium carbonate in the epilimnion. These findings suggest that Phacotus lenticularis should be considered in the assessment of hard-water lake carbon cycling.