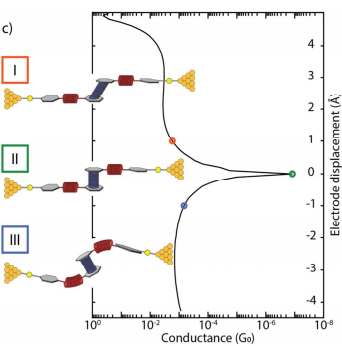 In recent years, studies on single-molecule junctions have rapidly become a mature research field.(1,2) The combination of the structural diversity accessible by synthetic chemistry with the continuously improving skills of experimental and theoretical physics enabled the exploration of individual molecules as the tiniest functional building blocks for electronic circuits and sensors.(3,4) The steady refinement of the break-junction technique also allowed to study correlations between mechanical manipulations and transport features at the single-molecule level in a systematic way.(5) Examples include binary switching through mechanical control of the metal–molecule contact geometry(6) or through stereoelectronic effects,(7) mechanical-stress-sensitive redox chromophores,(8) and coordination compounds that show spin-state switching under mechanical stress.(9) Furthermore, the sensitivity of the technique makes it possible to observe intermolecular behaviors such as π-stacking,(10,11) and more recently, the interdependence of conductance and frontier orbitals involved in the π-stacking(12,13) could be directly demonstrated.(14)
Particularly interesting are destructive quantum interference effects leading to a strong suppression of electron transmission at specific energies, which make them an ideal feature for applications in, e.g., thermo-(15) or voltage-dependent switching.(16) Their manipulation has been reported by external means including solid-state(17) or electrochemical gating,(18) humidity,(19)and the sliding of π-stacked molecules relative to each other.(14) Deliberate manipulation of the latter, however, remains elusive as it requires strict temperature conditions and is based on intermolecular interactions. In particular, the intermolecular character requires the coincidental presence of two molecules inside the junction. For this reason, approaches that intramolecularly imitate intermolecular π-stacking move into the focus of interest. Along these lines, the [2.2]paracyclophane (PC) compound is highly appealing.(20) First described by Farthing et al. in 1949, it consists of two stacked benzene rings that are mechanically stabilized by two nonconjugated linkers.(21) Integrated as central unit of an oligo-phenylene-ethynylene (OPE) rod with terminal binding groups to gold electrodes (Figure 1), we show here that using a mechanically controlled break junction (MCBJ) the π-stacking (and, therefore, the conductance) can be modulated by exerting a mechanical shear force to it. Simulations based on density functional theory (DFT) reveal a sensitive correlation between electrode displacement and molecular conductance, which is interpreted in terms of quantum interference effects between the frontier orbitals.