«We have to talk about what the future holds for us»

In May 2016, Patrick Wäger took over the helm at Empa’s Technology and Society lab. Closing material cycles and performing life cycle and technology assessments are just some of the topics that now come under his dominion. 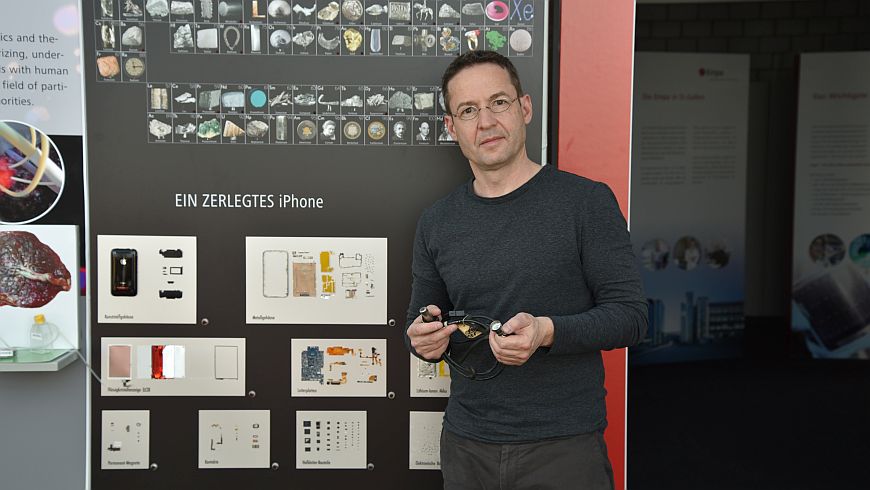 Patrick Wäger spent the majority of his childhood and youth as a Swiss expat living in Milan, Paris, Strasbourg and Königstein im Taunus (Germany). As he moved so frequently, sometimes even at short notice, he had his fair share of goodbyes and fresh starts. Wäger soon learned how to find his bearings in changing environments, develop his own way of seeing things and not take everything for granted. And the best way to learn languages is when you’re a child – where they are spoken, he adds. The nomadic aspect of his childhood is still in his blood. Every so often, he gets itchy feet and explores new avenues. Sometimes he might simply immerse himself in a good book, other times he really does set off on his travels.

After leaving school, the Swiss expat returned to his homeland, studied chemistry at ETH Zurich and did a PhD on indoor toxins at the Institute of Toxicology of ETH Zurich and the University of Zurich. He followed up his degree with a job as an environmental adviser at the company Elektrowatt Ingenieu-runternehmung AG in Zurich’s Seefeld district and eventually joined Empa in 1993 for a research project on the disposal of filter dust from waste incineration plants.

A few years later, he moved back to academia to embark on a university degree in philosophy and so-ciology. According to Wäger, it is important for scientists who deal with sustainability issues to develop a certain sensitivity to ideas and concepts from other scientific fields. Ultimately, he believes that tech-nology were inconceivable without the people who develop and use it for certain purposes, and vice versa.

Wäger sums up the goal of the Technology and Society lab thus: to create and pass on knowledge in order to facilitate and enable the transition to a more sustainable society. With this in mind, the lab fo-cuses on analyzing the materials and energy flows that go hand in hand with the production, use and disposal of new materials and technological applications, and assessing them in terms of natural (eco-logical) and social (ethical) framework conditions.

One of the material categories the Technology and Society lab examines is rare metals, which are es-sential for numerous technological applications such as information and communication technologies (ICT) or energy conversion and storage. Many rare metals, such as indium, platinum metals or rare earth elements like neodymium and dysprosium, are classed as being in critically scarce supply. With regards to recycling them from what is dubbed the “urban mine”, the Technology and Society lab, therefore, studies how these materials are distributed in the manmade world, the anthroposphere.

Another key material category that the lab focuses on is microplastics, i.e. small plastic components measuring less than five millimeters in diameter, which could pose a potential risk to humans and the environment. The Environmental Risk Assessment and Management (ERAM) research group led by Bernd Nowack, one of Empa’s four “Distinguished Senior Researchers”, studies how they behave in the environment.

“My goal is to create knowledge that might be useful to shape society,” explains Wäger. Such a “transi-tion” is especially important in his specialist field – sustainability. The knowhow from his research should help shape and change society. However, data is not enough by itself; society’s behavior pat-terns also need to be factored in. “We try to tally people’s behavior with the classic life cycle assess-ment data,” explains Wäger. “We can’t tell society what to do; that’s where the political process comes in. But we can support the process by highlighting the actual or potential consequences of our conduct, which is inextricably linked to the use of new materials and technologies, from a scientific perspective.” He believes it is up to environmental researchers to reveal and talk about potential future developments and the associated impact on nature and the environment.

The knowhow garnered in the lab and the team’s long-standing experience in disposing of old electri-cal and electronic equipment (EEE) is therefore channeled into existing or new standards and regula-tions. Wäger cites the current revision of the Electronic Scrap Ordinance (VREG) and the CENELEC standard on the collection, logistics and treatment of EEE as examples.

For Wäger, the topic is also a personal matter – one which he tackles in the same way as his research: practically and within a reasonable framework. Whenever possible, for instance, he uses public transport. But that does not stop him from flying away with his children on vacation from time to time. “Becoming a fundamentalist isn’t the answer, either,” he explains. “But looking after things and the en-vironment is necessary – and a decent start.”