Compared to the preindustrial era, the carbon dioxide concentration (CO2) in the atmosphere has risen to nearly a 1.5-fold higher concentration in 2016, and it continues to rise. As part of the Global Atmosphere Watch programme of the World Meteorological Organization (WMO), more than 50 nations are jointly monitoring greenhouse gases such as CO2, methane and nitrous oxide. Within this context, well over 150 experts from around the globe are convening at Empa from 28 to 31 August to discuss the fundamental principles for long-term measurements and to develop new measurement techniques. 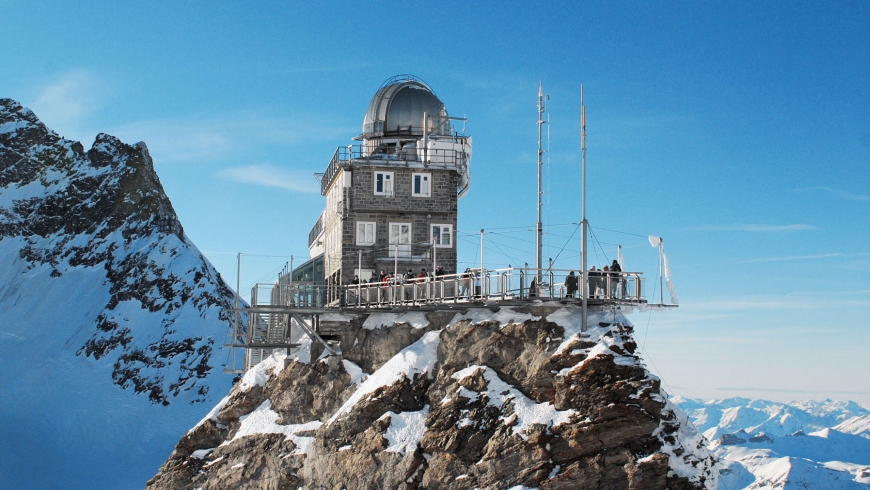 Research station Jungfraujoch at an altitude of 3580 meters. Image: www.Jungfrau.ch
The researchers who are participating in the GAW programme of the WMO specialize in taking the atmosphere’s pulse. For example, they monitor the atmospheric CO2 concentration by means of online measurements and analyze its sources and sinks. According to WMO’s Greenhouse Gas Bulletin, roughly two thirds of the global greenhouse effect are due to CO2. The second most important greenhouse gas, methane (CH4), contributes approximately 17 percent. Nitrous oxide (N2O) follows in third place with a contribution of about 6 percent.

Why do we need global coordination of measurements?

The quantification of the relevant processes, i.e., answering the question who contributes how much to the greenhouse effect and in which manner, is a prerequisite for developing and implementing appropriate reduction measures and requires the worldwide coordination of the observations. Measurement data must be of high quality and comparable around the globe to be able to detect even small regional differences and trends and to be able to draw reliable conclusions.

Since the mid-1990s, Empa has been operating two “Central Facilities” that audit and support global measurement stations in order to achieve the required quality targets. As part of these responsibilities, Empa has invited international experts to the biannual GGMT-2017 conference (officially: 19th WMO/IAEA Meeting on Carbon Dioxide, Other Greenhouse Gases and Related Measurement Techniques) in Dübendorf, Switzerland. GGMT-2017 takes place immediately after the 10th International Carbon Dioxide Conference (ICDC 10), which brought together international climate researchers from 21 to 25 August in Interlaken, Switzerland.

Online monitoring in Hawaii, in Beromünster and at Jungfraujoch

Monthly average CO2 concentration in the atmosphere in Hawaii (gray, measured by the Scripps Institution of Oceanography and National Oceanic and Atmospheric Administration / Earth System Research Laboratory) and at Jungfraujoch (red).
Measurements at Jungfraujoch, in combination with the investigation of the atmospheric transport, provide insights into the origin of the greenhouse gas: since 2008, a prototype developed at Empa is the first instrument worldwide that also continuously measures the concentration of the natural carbon isotope 13C as well as of the oxygen isotope 18O in CO2. This allows detailed inferences about CO2 sources and sinks. For instance, from spring to fall CO2 concentrations decrease significantly during the afternoon. This decrease can be attributed to the photosynthetic activity of plants, which peaks during the afternoon; this is also reflected in a characteristic enrichment in 13C in CO2. (12C as compared to 13C is preferentially converted into sugar by plants during photosynthesis.)

Where do greenhouse gases come from?
According to WMO, more than 90 percent of the additional CO2 that reaches the atmosphere comes from the burning of coal, oil and natural gas, and from cement production; another ten percent can be attributed to cutting down forests. Approximately one half of this amount is absorbed by CO2 sinks such as the oceans and vegetation, while the other half remains in the atmosphere for good. Other greenhouse gases are also mostly produced by humans: 60 percent of the increase in methane is due to livestock farming, rice paddies, oil and natural gas production, landfill, and burning of biomass; 40 percent come from natural sources. 60 percent of atmospheric nitrous oxide, however, is natural, while 40 percent comes from humans, mostly from the use of fertilizers, from industrial processes, and the burning of biomass.
Links