A long way to a breakthrough

Another milestone for an extremely versatile material with Swiss roots: On May 3, a 127-meter-long railway bridge will be pushed over the A8 motorway near Stuttgart, its 72 suspension cables consisting entirely of carbon fiber-reinforced polymer (CFRP). This ultra-light yet extremely stable material was developed largely at Empa and has since been used in more and more structures. 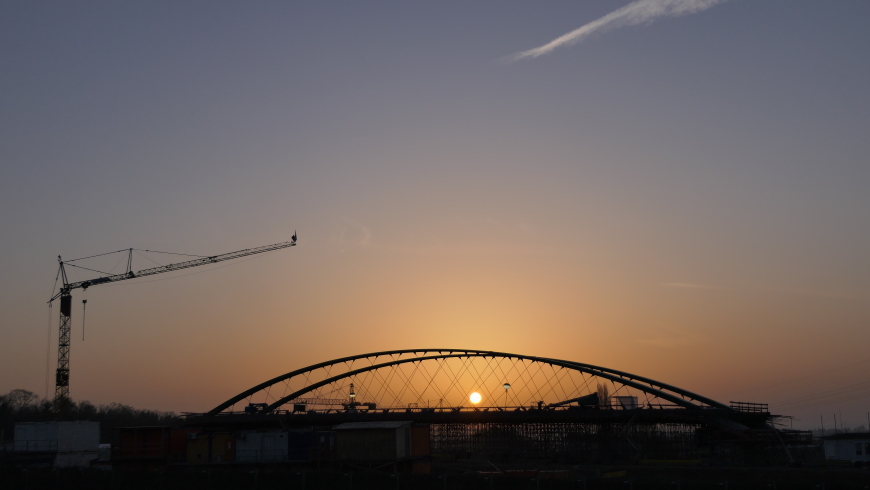 On the night of Sunday, May 3, a spectacular bridge-building event is taking place in Stuttgart: Stuttgarter Strassenbahnen AG (SSB) is extending the U6 light rail line from Stuttgart-Fasanenhof to the airport. This requires a 127-metre long bridge over the A8 motorway. The bridge arch and the deck have been constructed directly next to the motorway in recent months. The filigree network arch bridge consists of two parallel steel arches and the concrete deck suspended from carbon hangers from Switzerland. The builders will push the colossus of around 1500 tons across the closed motorway at night. However, the 72 carbon hangers of the company Carbo-Link AG in Fehraltorf, a spin-off of Empa, which weigh only 1675 kilograms in total, contribute little to this mass.

A rare type of bridge

The project began as early as 2012, when the engineering office schlaich bergermann partner (sbp) from Stuttgart won the competition for the motorway crossing of the U6 light rail line with its elegant network arch bridge. In contrast to a classic tied arch bridge with vertical hangers, the diagonally arranged hangers cross each other, creating the impression of a fine cable net. A network arch bridge has the static effect of a truss girder, it is stiffer compared to tied arch bridges with vertical hangers. This means that the deflection under traffic load is lower. This is particularly important for railway bridges: If the deflections under the load of a train are too large, the rails bend and the train derails.

Despite this advantage, only a few bridges of this type have been realized so far, because there were various problems with the steel hangers, especially regarding fatigue. The competition design of sbp also initially included steel cables as hangers. But the client hesitated with the construction. They appreciated the elegance of the bridge and especially the column-free crossing of the eight motorway lanes. However, they considered the costs to be too high.

The solution: Hangers made of CFRP 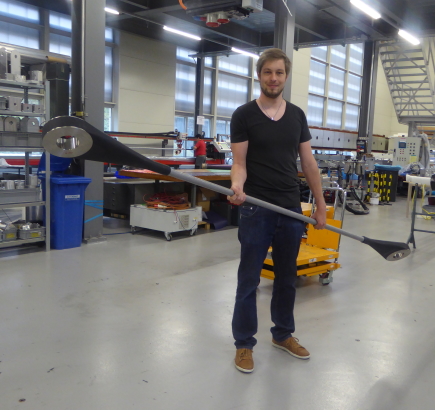 In the end, the decisive factor was an idea by Lorenz Haspel from the sbp team to replace the steel cables with pre-stressed carbon hangers, or, to put it correctly from a material science point of view: hangers made of carbon fibre reinforced polymers (CFRP). To the astonishment of everyone, the costs could even be reduced as a result. But unlike steel cables, CFRP hangers were not yet a mass product. So who would be able to supply the 72 CFRP hangers required? In an earlier project, Haspel had worked with Andreas Winistörfer, the founder and CEO of the Empa spin-off Carbo-Link, which has been producing CFRP backstay rods for construction cranes for around 20 years. It was these rods that gave Haspel the idea of using CFRP hangers in the first place.

In Germany, new construction products require a building authority approval. Obtaining one, especially for a completely new product, as CFRP hangers undoubtedly were, is usually time-consuming and expensive. However, neither money nor time was available for the Stuttgart light rail bridge. An "approval on a case-by-case basis" was the only chance, and the responsible approval authority in Baden-Württemberg agreed to try this approach. In autumn 2016, SSB therefore commissioned Winistörfer to produce three prototypes - and the Empa team led by Masoud Motavalli and Robert Widmann to carry out the necessary experiments. The subject was not new to the Empa researchers, as they had been working intensively on the development of CFRP tension members for bridge construction since the 1980s.

Simulating 100 years in a few months

Carbo-Link delivered the prototypes at the end of September 2016, and in October Motavalli's team began mechanical testing. The most important task was to simulate 100 years of railway operation on the CFRP hangers - within a few months. This corresponds to a stress of more than 11 million crossings. The high oscillation frequency of 4.2 Hz, which was chosen for time and cost reasons, initially led to dangerous overheating at the contact surfaces between the CFRP and the titanium thimbles. The project threatened to fail until it was decided to reduce the load amplitude, which had been greatly exceeded out of ambition, to a realistic level. In the end, the two hangers examined survived the approximately 11 million load cycles without any problems.

The task of Empa experts Urs Meier - a pioneer in CFRP research - and Peter Richner, now Deputy Director of Empa, was to analyze and evaluate the extensive data. In addition to the fatigue properties, they also had to consider issues such as weathering resistance, lightning, fire, the influence of electrical and magnetic fields, and vandalism. On May 17, 2017, Meier and Richner sent their report to Stuttgart after just over seven months. All had worked under high tension and enormous time pressure. And then ... nothing happened. Months went by, and both Carbo-Link CEO Winistörfer and Meier and Richner came to the conclusion: "A waste of time and effort".

They had already written off the project when, on April 10, 2018, a letter suddenly arrived from the licensing authority in Baden-Württemberg, which allowed the use of CFRP hangers in the construction of the bridge over the A8 motorway under certain conditions. Among other things, Empa's expert opinion and the requirements it contained had to be included in the tender documents for the project. Only one offer was received in response to the subsequent invitation to tender for the project; at the time, the construction industry in Germany was experiencing overheating. As the costs in the bid were significantly higher than the planned budget, things looked bleak again in autumn 2018 for the network arch bridge with CFRP hangers. The project was in danger of finally failing for cost reasons. However, shortly before Christmas, those responsible surprisingly decided in favour of the future-oriented technology.

A world premiere in bridge construction

Next Sunday the world's first large bridge to be completely suspended from CFRP tension members will be built - a world premiere to which Carbo-Link and Empa made a major contribution. The lower initial investment costs for the CFRP variant in comparison with the steel variant came as a particular surprise to the experts, because in previous bridge projects which were not supported by research funding, CFRP tension members did not stand a commercial chance against steel. But the demanding requirement profile for hangers of network arch bridges is as if tailor-made for the material CFRP. The cross-sectional area of the CFRP hangers is only a quarter of what would be required for hangers made of steel - an important reason for the economic efficiency of the new material. The 72 CFRP hangers were installed in mid-April. Due to their low weight, this could be carried out without a crane and with only three construction workers.

And the CFRP bridge also scores points in terms of sustainability. Since the Empa report did not yet address the issue of sustainability of CFRP hangers, the parties involved were initially doubtful about this. Empa researchers were recently able to close this "gap" in a further project for a 130 meter wide double-track railway bridge. The results clearly speak in favour of the CFRP variant. For example, the CO2 emissions for the steel variant are about three times higher and the energy consumption more than twice as high.

The CFRP hangers of the Stuttgart light rail bridge are likely to be groundbreaking for future network arch bridges. There are likely to be further niches for CFRP hangers in which they will be competitive with steel not only technically but also commercially. One example is the enormously long cables of wide-span cable-stayed bridges in Asia. However, this fast money cannot be earned with innovative materials in the construction sector, as it has taken around 40 years of intensive research and enormous perseverance - above all by Urs Meier and his team - to help CFRP achieve a breakthrough in the construction industry. "That is almost absurdly long," says Peter Richner. "This is precisely why we launched our NEST demonstration platform a few years ago, in order to put innovations in the construction and energy sectors into practice much faster than that".

Nevertheless, there is still no reason for the steel industry to be concerned; the volume - not the mass - of the steel currently being converted is 5500 times that of CFRP.