X-ray analytics for research and industry

The Empa Center for X-ray Analytics is now up-and-running, and its state-of-the-art X-ray machines have been installed. These provide not just fascinating images but in particular deep insights into materials, components and their constituent elements - down to the individual molecule. The research projects carried out by the centre are as varied as the equipment and methods of analysis used there. 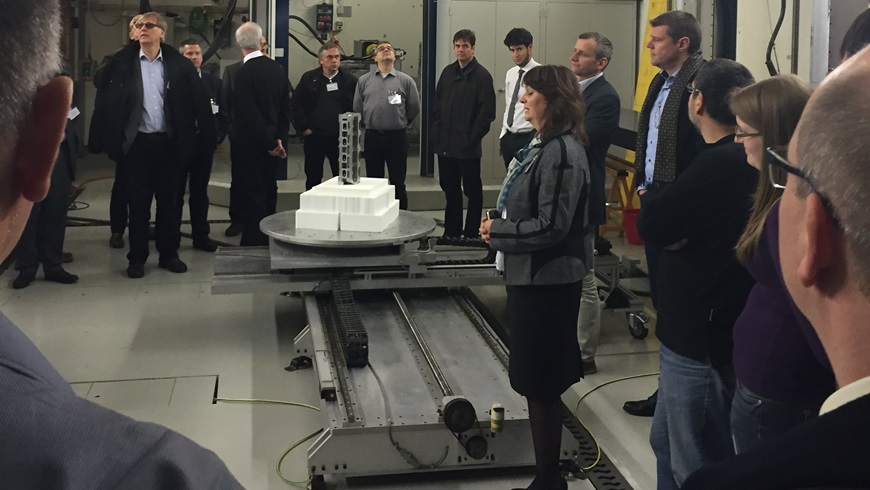 Antonia Neels, Head of the Empa Center for X-ray Analytics, explains the structure and objectives of the centre during a tour of the laboratories. The lab tour was supported by the entire X-ray team, who explained numerous examples of applications.
"We use X-rays to make the invisible visible," says Antonia Neels, Head of the Empa Center for X-ray Analytics. How this is possible was revealed in a series of short presentations at an event with around 100 participants from the worlds of research and industry held on 2 December. Researchers from the Empa centre and the Paul Scherrer Institute (PSI) presented applications of X-ray analytics and in the process also showed that the research methods used by the two institutes complement each other perfectly. For example, Eberhard Lehmann from the PSI highlighted the cooperation in the field of diffraction and 3D imaging using neutron radiation and X-rays. And the PSI researcher Marco Stampanoni demonstrated the power of X-ray tomography on a film reel from 1948: "No one dared to take the film out of the can because it was so brittle, it would probably have broken in the process." The specialists therefore x-rayed the film in the can, unrolled it virtually and read each individual photogram. In a kind of world premiere, Stampanoni showed the reconstructed film clip of the opening of the Common British News newspaper.

From a lorry right down to a molecule

The new Empa center has set itself the goal of further developing X-ray methods with the aim of strengthening developments in the field of materials research. Scientific and industrial innovation will be supported across the whole range of resolutions and sample sizes; this is now possible with everything from lorries down to individual molecules. For example, Mathieu Plamondon can inspect what is being transported in a lorry without actually having to climb into it. The Empa researcher uses the high-energy linac CT system to verify whether the lorry is carrying cigarettes, water or bicycles. The resolution extends down to the millimetre range, so that even a bicycle spoke behind a water tank is visible.
Rolf Kaufmann is responsible for applications involving smaller objects, for which higher resolutions are needed. With his micro-CT scanner, he can put bones or the wood cells of a violin under the microscope. He will soon have an additional device called a nano-CT scanner in his laboratory, which will reach a resolution of up to 300 nanometres. And Antonia Neels can achieve even higher resolutions with the SAXS, WAXS and XRD devices. She can, for example, determine the arrangement of cellulose fibres in wood, nanostructures on surfaces and even molecular structures. It is possible to go even further at the PSI: even individual molecules can be detected with its synchrotron. A device with a still higher resolution is currently under construction; the 800-metre-long SwissFEL is expected to go into operation at the end of 2016.
But the X-ray center at Empa has another specialist area: Michele Griffa makes 3D simulations from X-ray images, enabling him to distinguish between different materials. For example, with recycled concrete, he can determine how much of this comes from used concrete. This is important because if the recycled material accumulates too much in one particular area, the concrete will no longer be strong enough.

You can download the images or a zip-file with images here.