Waterproof through and through

Water causes wood to rot and weather, which looks unsightly and gradually destroys the material. Empa researchers have now developed a strategy to combat this. 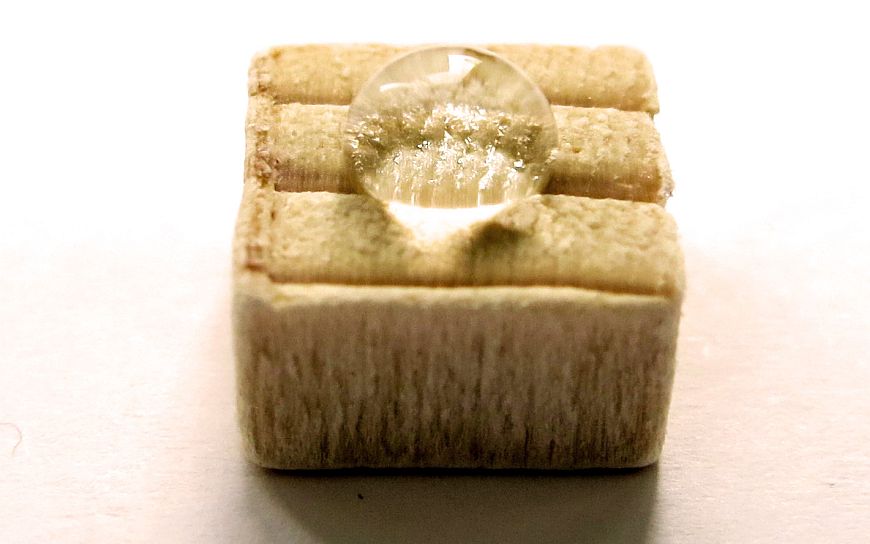 Tropical wood like teak is readily used outdoors because it is extremely weatherproof. It is somewhat resistant to water because the wood cells deposit substances called flavonoids and terpenes in the tight spaces between the cells. As there is hardly any room left for rainwater to get into the gaps between the cells, the teak escapes weathering. “This gave us the idea for our first experiment,” says Empa researcher Etienne Cabane. He and his team began by trying to add even more flavonoids to the wood. When he placed the enriched sample in water for a few hours, however, the substances leaked out again. This occurs because the substances are not chemically bound to the wood. In other words, teak also weathers, albeit a lot more slowly.

As flavonoids can’t be bound chemically, the researchers sought other substances. And they didn’t have to look very far: combining individual molecules is the principle of polymers. Placing these molecules in the gaps between cells, however, is easier said than done. It requires a carrier fluid. Water would be ideal as it is readily absorbed by the wood. But unfortunately, the water causes the fibers to swell and trigger micro-cracks in the cell wall. “Which is precisely what we’re trying to prevent,” says Cabane. Chemical solvents such as DMSO or pyridine make good carrier fluids that don’t cause swelling. And although they are neither healthy nor environmentally friendly, at least they enabled the researchers to demonstrate in the lab that the idea actually works.

A sink as on-road test

For instance, they placed molecules called styrene, a component of the well-known synthetic material polystyrene, in the gaps between the cells, chemically bound them to the wood and interlinked them. This transforms natural wood into a composite material made of wood and polymers. “The wood even remains waterproof when I scratch it,” says Cabane. “This is because the synthetic material has penetrated deep inside the wood.” He is talking about millimeters, not centimeters. So if he wants to make a thick piece of wood waterproof, another technique is needed. “We’re currently building a sink,” says the researcher. This involves cutting the wood into thin layers, integrating the synthetic material and sticking the layers back together again – which is referred to as veneering.
The team’s research is not quite there yet, however. They plan is to move away from harmful carrier fluids and use water or supercritical carbon dioxide (CO2) instead of solvents in future. After all, these substances aren’t just safe; they are also available in abundance – another pivotal factor in the mass production of waterproof wood and its acceptance among consumers.