Varnish affects the sound of a violin

Varnishes protect works of art and wooden instruments from environmental damage. However, until recently, little research had been carried out into the effects of varnish on the sound of violins. Empa researchers have now investigated this relationship and have published their initial findings. 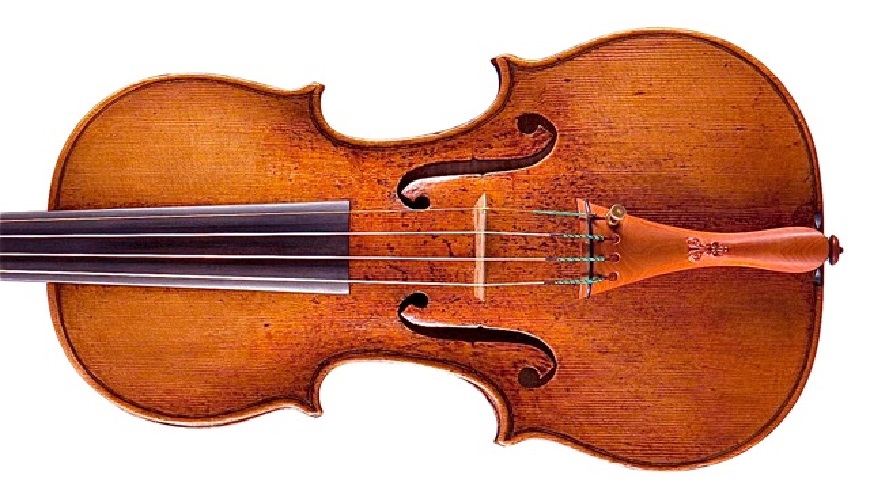 Leonardo da Vinci's oil painting "Mona Lisa" looks rather gloomy with its dark green and brown colours. It is a little-known fact that the maestro painted the picture in bright colours – so the subject appears bathed in the light of a sunny day. What caused this difference in colour? Da Vinci covered his oil painting with varnish to protect it. The varnish acts like a filter, causing the picture to become darker than the artist originally painted it.

It has the same effect on the spruce used to make violins and other stringed instruments. In its raw state, it is white with a touch of gold. The wood lacks durability, so violin makers protect it from environmental damage using a varnish. It is this protective coating that gives the violin its elegant dark brown colour.

Violin makers pass their varnish recipes down from one generation to the next. It is rare for anyone outside the family to find out how exactly the mixture of resins and oils is formulated. The chemistry of varnishes has been scientifically researched for a long time. In contrast, little attention has been paid to the physical properties of varnishes – wrongly in the opinion of Marjan Gilani from Empa's Applied Wood Research Laboratory. The scientist and her colleagues suspected that varnish affects the vibrational properties and therefore the sound characteristics of violins, and they began to investigate this relationship. The first stage of the research was concluded with the publication of a scientific paper in the journal "Applied Physics A". The findings support the Empa researchers' hypothesis. 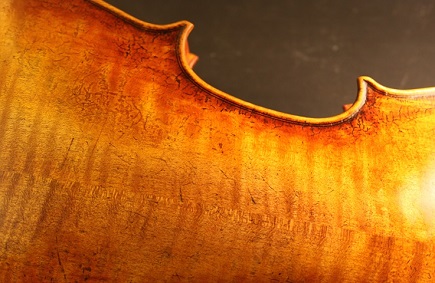 This violin was made in the course of the project with the support of the Walter Fischli Foundation. Its exterior is not very different from that of the violin from Cremona, which is nearly four hundred years old (see previous paragraph). The violin maker Michael Baumgartner formulated the varnish, which gave the violin a texture that was true to the original.

For their research, Gilani and her team cut 40 wood samples in the direction of the grain. 20 of these samples were taken from the young wood and the other 20 from the heartwood of a Norway spruce. Gilani and her colleagues also cut a further 20 samples from the same spruce across the grain. Based on these three types of test samples, the researchers were able to study the sound behaviour of different wood structures. Johanna Pflaum, a trained violin maker, student of environmental sciences and member of Gilani's research group, created two varnishes in the lab. The research group also received two further varnishes from German violin makers. Gilani coated the spruce samples with these four varnishes. For each type of sample, five of the twenty pieces of wood were coated with the same varnish and were dried and cured for eleven hours using UV light.

However before this, the researchers measured the stiffness and sound insulation of the wood samples in their raw state and the mass of the varnish. The purpose of the measurements was to allow the properties of the bare wood to be compared with those of the treated wood. After curing, the experts measured the same parameters again. They also ascertained the sound propagation of the samples at the start and end of the eleven-hour UV irradiation process. Sound propagation describes the way in which tones leave the body of the violin and move towards the audience. Higher sound propagation values result in clearer tones.

In the 40 samples in total that were cut along the grain, the varnish increased the sound insulation of the heartwood and young wood and reduced its stiffness compared to the raw state. This may be desirable because, up to a certain point, the more elastic the wood of the violin, the warmer and softer the sound, particularly in the case of high notes, which can sometimes be perceived as unpleasant. However, this change is accompanied by a loss of clarity and sharpness of the violin sound, which was evident in the laboratory as a reduction in sound propagation. The findings were different for the samples cut across the grain. With these, both the sound insulation and the stiffness increased. Similarly, the sound propagation values also increased. An audience in a concert hall would therefore perceive clear, sharp sounds with strong acoustic presence if the instrument was made in the same way as the samples cut across the grain.

The wood researchers also analysed part of the samples cut along the grain at the Empa Center for X-ray Analytics. They discerned from the X-ray images that the varnishes formed layers of different thicknesses on the wood and had different effects on the density of the pieces of wood. In addition, some varnishes penetrated deeper into the wood than others. The samples with the highest penetration had been treated with the varnish with the highest oil content. They were also the wood samples that experienced the largest drop in sound propagation – i.e. their tone lost the most clarity due to the varnish.

Following on from these measurement results, a relationship was established between the varnish composition, the microstructure of the wood/varnish composites, their mechanical properties and their sound behaviour. Gilani and her research group intend to refine these findings in other studies. An additional scientist is joining the research team in April 2016 to assist with this work. 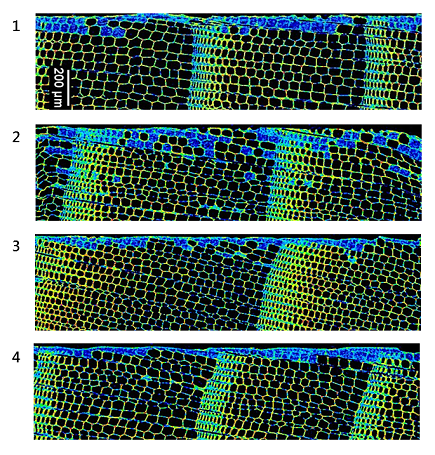 X-ray tomography images show the microstructure of wood samples treated with four different varnishes (pictured in blue). The red, yellow and green colouring indicates the wood structure, the concentrations corresponding to the growth rings. It is also evident that the varnish penetrated much deeper into the wood in the second sample than with the others. This led to a correspondingly greater decrease in the sound propagation values for this sample.

Antique violins at the Empa Center for X-ray Analytics

For comparison purposes, Empa researchers also analysed two antique violins at the Empa Center for X-ray Analytics. One was made by a violin maker in Cremona in the 17th century. This town is located around 80 kilometres south-east of Milan and produced a number of famous violin makers, including Antonio Stradivari. The second violin was made in around 1920 in the German state of Saxony. Scientists took samples measuring 1.5 cubic millimetres in volume from both violins. The violin from Saxony had fine cracks in the varnish, impacts on the surface and woodworm damage. Compared to this violin, the violin from Cremona had a higher density of wood/varnish composite. In the images from the Center for X-ray Analytics, high densities are shown in yellow, green and red, and low densities are shown in blue. Stiffness and sound propagation values also increase with density – the violin from Cremona will therefore have produced clearer tones than the violin from Saxony. 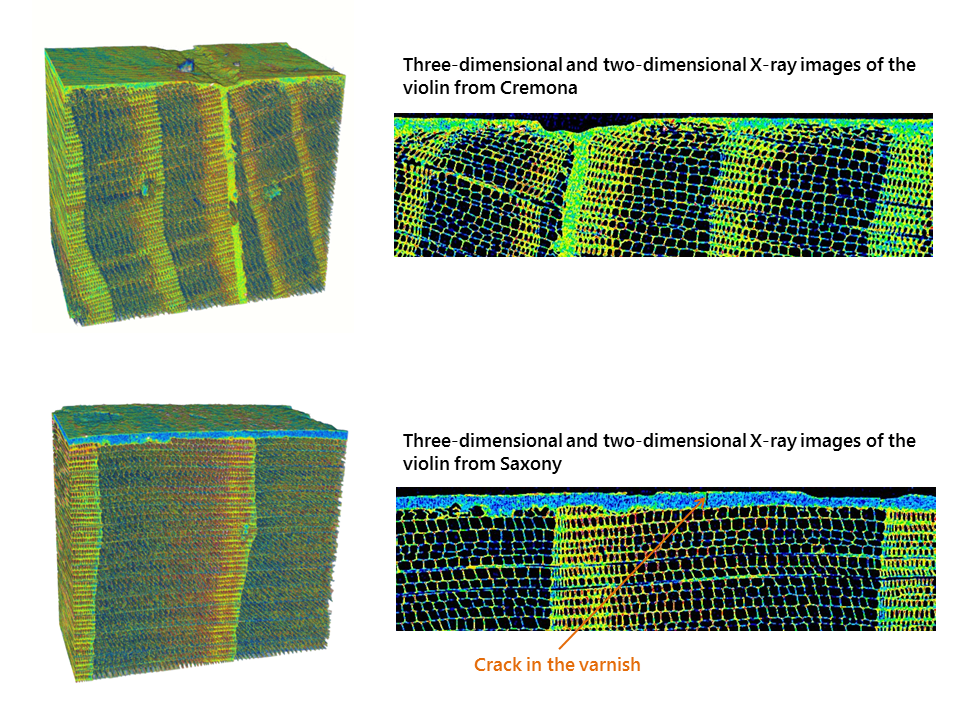 The following animations show the microstructure of both antique violines:

Microstructure of the violine from Cremona

Microstructure of the violine from Saxony