How can we organize energy supply in the post-fossil era? How can energy be stored efficiently? And how can we organize distribution as economically and conveniently as possible? Empa’s research platform “ehub” is searching for answers to these questions. 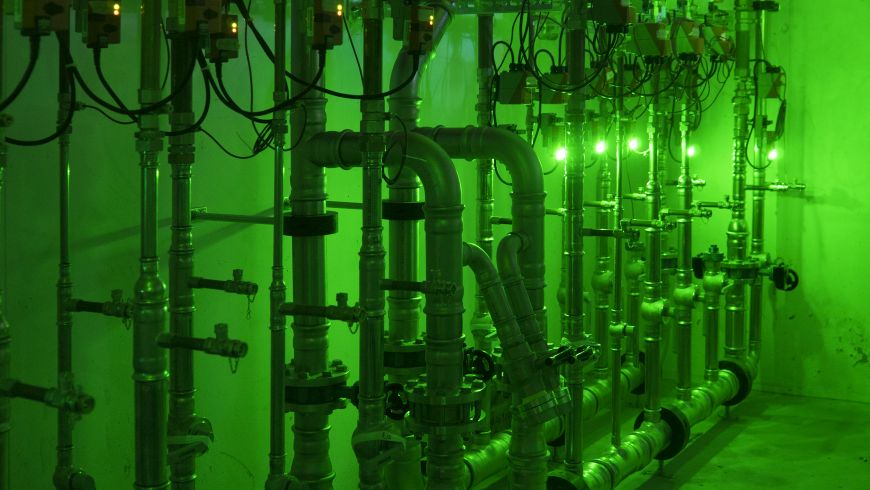 A combination of 13 different storage systems and energy sources supplies the futuristic residential area in the research building NEST and the vehicle pool of move, Empa’s future mobility demonstrator. The optimum control of such complex supply networks has never really been investigated – or tested in actual operation. The Energy Hub (ehub) demonstrator is set to change all this and should provide insights into a safe and sustainable energy of the future.
The “NEST” research building on the Empa campus in Dübendorf proudly shows off its research projects assembled on open platforms: the wooden façade of the “Vision Wood” unit, the projecting meeting rooms of the “meet2create” office experiment and soon the glass façade of the “Solar Fitness & Wellness” unit spanning two floors. Yet a decisive – and perhaps the most visionary – part of the research work is hidden behind the scenes. The NEST research modules and the mobility demonstrator “move” are connected via an innovative and particularly flexible energy network. Together they form a kind of neighborhood of the future, which could demonstrate how we should design and operate energy supply in our cities over the next decades.

Homes of the future can self-supply with energy for extended periods. However, they are not entirely independent. They connect to the public electricity grid at regular intervals, feeding in electricity from solar units or collecting additional energy at times of peak load or over longer periods, like in winter.

But what’s the best way to regulate this system? And whose interests ultimately determine how it is run? Is it the energy suppliers, who understandably want an electricity network with maximum stability and predictable loads as well as access to emergency reserves at times of peak demand? Should they be allowed in such cases to switch appliances in private households on and off in order to keep the grid stable, serve the public good (and maximize their profits at the same time)? Should energy suppliers install and operate new technologies for residents, or is it the job of the private households to use energy in the most economical way? Is it up to the residents to run their homes ecologically and reduce their carbon footprint – or should they instead use energy from the most reasonably priced source in each case?

What about suppliers who are looking to establish new, personal services with knowledge gathered from the internet – and thus overload the grid in a way hardly foreseeable for network operators? What if a storage battery in the building is not just used to optimize one’s own consumption, but also to avoid high tariffs and any usage restrictions from the operator?

These questions are relevant not only from a social and economic perspective but also from a technical point of view, as there has been insufficient research to date on the technical solution for future feed-in and procurement rules. Empa’s energy research demonstrator, the “Energy Hub” (“ehub” for short) aims to provide answers and demonstrate what is possible. Once NEST is fully occupied, up to 15 research units with apartments, offices and leisure facilities will be supplied by ehub. This means that it will cover the energy consumption of 40 residents as well as 40 people working in the building during the day. The energy consumption of the individual units will change several times during the day, thus altering the direction of the energy flow. For example, the midday sun will shine on the solar panels on the roofs of the residential modules where no-one is using energy, while at the same time energy is needed in the office section. In the evenings, the excess heat from the modules with southwest-facing façades can be diverted to heat the sauna in the gym and spa.

Summer heat for the winter

Together with energy management throughout the course of a day, storage media are also being tested that can store energy over a day, a week or even an entire season. The interplay of all these components should then show what is possible in terms of the optimum distribution and use of energy in a renewables age. ehub has an ice storage unit comprising 65 cubic meters, two geothermal probes drilled 260 meters into the earth and one spiral geothermal probe that goes down twelve meters into the ground. In the summer time, heat from the sun is used to defrost ice, while in the winter a heat pump cools the water to freezing. This allows the crystallization heat released upon freezing to also be used.

Warm water with a temperature of up to 80 degrees is circulated around the three geothermal probes in the summer, and the stored heat in the ground can then be recuperated into the homes during the winter half-year. NEST also has supercondensators for fast electricity storage as well as a battery pack with a capacity of 96 kWh (kilowatt hours). That corresponds to the capacity of five BMW i3 cars or one Tesla Model S at the top of the range. According to the plan, the batteries should be able to store enough energy to fuel the fully occupied NEST for approximately one day.

Once the batteries are full, excess electricity can be diverted to move, where it is used to produce hydrogen in an electrolyzer. Hydrogen can be stored for several weeks in pressurized gas containers or can be used directly in fuel cell cars. NEST itself can also reuse hydrogen, as there is a high-temperature fuel cell in the basement that normally converts natural gas into electricity and heat. This system is to be used to test how much internally generated hydrogen can be mixed in with natural gas.

Flexibility as a research object

The building technology components integrated in NEST are not prototypes. Instead, they are generally commercially available appliances in line with the state of the art. The trick is the innovative method used to interconnect the components, which the researchers hope to use to flexibly evaluate new energy management scenarios and analyze their effectiveness. Not only can researchers and partners from industry install and validate new control modules or prototypes there, maximum flexibility of regulation is also possible. All of the equipment that runs in an automated manner in normal operation can be overridden by internal and external researchers, who can also add new algorithms and combine the equipment to form new consumer groups.

Research at ehub started in November. The first project for the ehub researchers is to compile theoretical advance calculations of the effects of electricity production tariffs on the distribution network. The hypotheses resulting from that project will then be implemented in ehub under real-world conditions and tested in practice in collaboration with the residents. NEST can also be used to simulate the effects of appliances and users that have a positive or negative impact on the stability of the network – in an extreme scenario even blackouts or the breakdown of the heating and ventilation system. The research platform allows for risk-free simulations, as it has a fallback level that can quickly re-establish normal operations.

The ehub research project will provide findings on how much energy is needed in residential areas and what the peaks are as well as on how the required energy volume can be sensibly reduced to a minimum. Some of the information gained will tell us how independently residential and office districts can manage their energy supply, and to what extent future legislation and directives can be used to encourage behavior that serves the interests of the grid. This makes ehub a political as well as a technical and ecological research project.

ehub is an energy research platform aimed at optimizing energy management at district level. It intelligently combines all the components in NEST that generate, store, convert or release energy. Moreover, it couples the energy flows from the building sector with the mobility demonstrator “move”, which is also located on the Empa campus and where surplus energy from renewable sources is converted into sustainable fuels for the mobility of the future.
Further information
Urs Elber
ehub / RFA Energy
Phone +41 58 765 4221
urs.elber@empa.ch
Editor/ Media contact
Rainer Klose
Communication
Phone +41 58 765 47 33
redaktion@empa.ch