Since 15 April, it is official: The Technology Transfer Center for 3D Printing in Medical Technology – Swiss m4m Center, in short – meets the requirements of ISO standard 13485:2016; it is thus allowed to produce implants and instruments for human patients. The starting signal for promising projects with Swiss SMEs: The partner network already comprises 45 companies and research institutions. 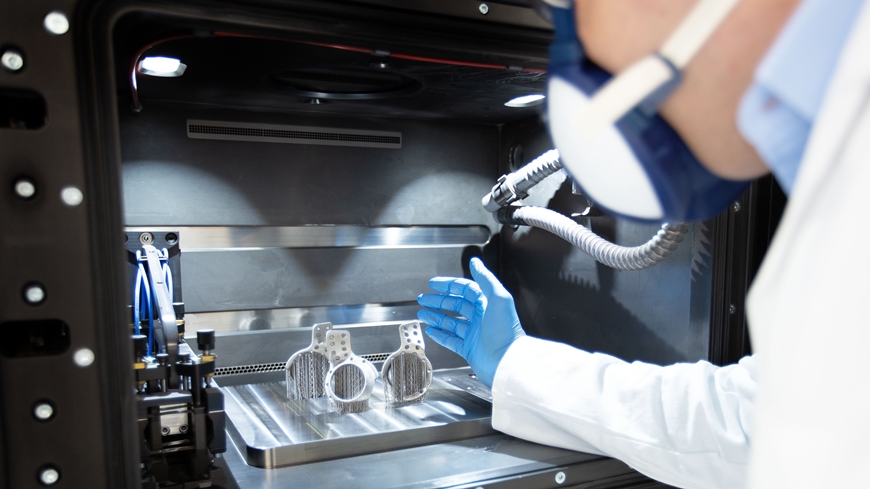 Freshly printed pelvic support rings for hip surgery before further processing: The thread-like structures serve as supports during the printing process and are removed later on. Image: Swiss m4m Center

The idea is as appealing as it is obvious: After a diagnosis of painful hip osteoarthritis, medical imaging creates a high-resolution 3D image of the defunct hip joint – and thus the basis for a customized implant. The data is processed further and ultimately ends up as a digital blueprint in a 3D printer, which produces the individual piece with a precise fit and at optimized cost.

The goal of the Swiss m4m Center in Bettlach in the canton of Solothurn is to promote these and other ideas 3D printing has made possible. Only opened in September 2020, it has now been successfully certified – according to the demanding ISO 13485:2016 standard for medical devices. This step allows the m4m experts to fabricate real products for patients with a production line they installed and tested in the past months.

The technology is complex: Three massive 3D printers are ready to go – supplemented by several "colleagues" that are just as necessary for the operation. For instance, a refrigerator-sized device to sift and clean the raw material for the printer, such as a powdered titanium alloy. The "depowdering" machine, which rotates and turns finished workpieces under vibration until every last grain of powder has trickled down. And a "furnace", in which printed parts are gradually heated to 600 to 800 degrees: stress-relieving annealing to eliminate internal stresses that heated 3D printing leaves in the material.

The extensive equipment park shows two things: First, 3D printing is more complex than it appears at first glance. And second, it is costly: According to Nicolas Bouduban, CEO of the Swiss m4m Center, the investment amounts to around two million Swiss francs. These investments are additionally supported by all partners with a goodwill for open cooperation, says Bouduban: "Everyone contributes – and gets visibility, project orders or know-how in return."

Geared to the needs of Swiss SMEs

So it's a give-and-take, with benefits for everyone: material manufacturers, equipment manufacturers, software developers for process and quality management, potential users such as clinics that can use novel medtech products. And above all for Swiss SMEs that neither own such equipment nor have the required know-how to operate it. For them, the Swiss m4m Center should become a "breeding ground" for industrializing innovative joint or dental prostheses and other medical products – from A to Z, from the idea to market analysis and transfer all the way to serial production.

Specific ideas? Yes, says Bouduban, they already exist. For example, precision-fit spinal implants to replace intervertebral discs based on 3D data from the patient. But before such projects can take off, there is always the question of whether an idea is suitable for 3D printing at all, explains board member Andreas Wenger, general manager of Precipart SA, which supplies companies worldwide with medical technology components. "With today's hype around 3D printing," says Wenger, "it's important to know where this technology makes sense." After all, there are proven processes in metalworking. Take milling, for example: If a desired product can be manufactured efficiently with it, 3D printing is often no longer competitive because it is too time-consuming – and hence too expensive. "Development engineers have to think in 3D to get the most out of this new technology," says Wenger. "At the Swiss m4m Center we pass on this know-how." 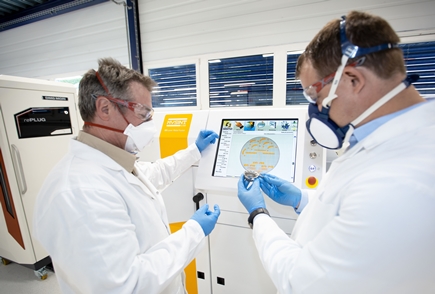 The process can bring significant advantages for complex workpieces – for example, when an implant can be shaped in just one step without the need for subsequent drilling or milling. There is also great potential in applications where several parts are combined and produced into a single component. As an example, Wenger mentions an implant that is currently being co-designed in Bettlach – with tubular structures inside: hidden channels that provide cooling. "You can't produce this with any other process in one step."

His conclusion: 3D printing can be a worthwhile solution for demanding requirements; for small to even high volumes – an opportunity for SMEs in the supply chain and also for medtech companies. Potential is abundant in Switzerland: The medtech industry, strongly represented in the southern foothills of the Jura, sold products and services worth almost 18 billion Swiss francs in 2019 – thanks to around 1400 companies and the know-how of a total of 63,000 employees.

Much support from industry

Thus, interest in the Swiss m4m Center is soaring. 45 partners have come on board since the opening in September 2019. Followers are multiplying steadily on business platforms such as LinkedIn. And a webinar by Swedish titanium powder manufacturer Sandvik, where CEO Bouduban presented the center, was watched by several thousand people. "The project seems to be hitting a nerve," says Pierangelo Gröning, member of Empa's Board of Directors, who was instrumental in setting up the Swiss m4m Center as a co-founder of the AM-TTC initiative. "A non-profit production line with open access for SMEs: This has never existed in Switzerland before."

In addition to technology transfer, the Swiss m4m Center will also focus on knowledge transfer. A training concept has been developed together with Höhere Fachschule Technik Mittelland. Likewise, Empa offers continuing education courses with experts in Bettlach and will also send its apprentices there for training in AM. The Swiss Foundation for Microtechnical Research (FSRM) in Neuchâtel is also offering a course. Since recently a training managerin is specifically responsible for training and further education.

The response so far makes Nicolas Bouduban confident, even if work is really only just beginning. Whether implants for patients who have suffered complicated fractures, whether in oral surgery or for custom-fit prostheses: Individualized solutions are a growth market for Bouduban. "The possibilities in the medtech sector are far from exhausted," he says. "And more and more companies want to gain a foothold in this area."

The Swiss m4m Center is part of the AM-TTC Alliance (Advanced Manufacturing Technology Transfer Centers) and is funded by several sources. Financial support for the 2019/20 start-up phase was provided by the ETH Board. The Swiss Federal Department of Economic Affairs, Education and Research, which has classified the Swiss m4m Center as a "research institution of national importance" towards the end of last year, is contributing funding until 2024. In addition, the cantons of Bern and Solothurn as well as numerous partners from the industry are supporting the project.

The AM-TTC Alliance was founded on the initiative of the Empa and has a mandate from the State Secretariat for Education, Research and Innovation to evaluate applications and monitor the development of AM-TTC centers. Besides the Swiss m4m Center, there is currently ANAXAM (Analytics with Neutrons and X-Rays for Advanced Manufacturing) at the Paul Scherrer Institute (PSI). Later this year, the AM-TTC Alliance will launch a call with the goal of establishing two to three additional centers. Currently, the Alliance comprises 22 member organizations, among them, in addition to Empa, ETH Zurich, EPFL and other research institutions, companies such as ABB and Siemens, and industrial associations. More information: www.am-ttc.ch 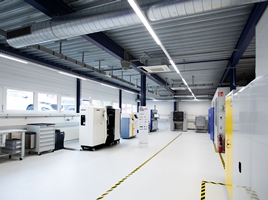 How does 3D printing actually work? What raw materials are needed? Which devices? And what happens to implants or other products after printing?
Impressions from the Swiss m4m Center are provided by a virtual tour. Interested? Take a look.

Homepage of the Swiss m4m Center in Bettlach

New Center for AM in medical technologoy: Implants from the 3D-Printer;
Media Release January 2019