Interdisciplinary, interconnected and oriented towards a sustainable future: These words describe Kristina Orehounig just as aptly as they describe the Empa laboratory “Urban Energy Systems”, which she is heading since February 2018. She has chosen an unusual path to her current scientific discipline – but that is precisely what she sees as an advantage in her day-to-day research. 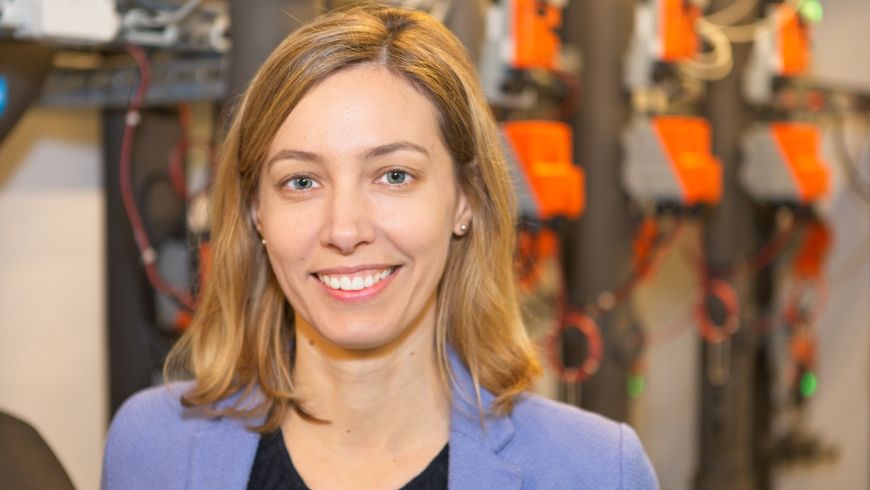 Kristina Orehounig has been running the Urban Energy Systems lab at Empa since February 2018. Previously, she was a researcher and lecturer at ETH Zurich. Image: Empa
Focus on technology: Kristina Orehounig was already drawn to the technical aspects of construction during her architectural studies in Vienna, and she was particularly fascinated by building physics. Nevertheless, she doesn't regret at all that her education wasn't completely straightforward before she found her professional home in the simulation of energy systems: “As an architect, I'm more free in certain ways of thinking. One learns to think holistically and to pursue even ideas that at first appear to be utopian in order to come up with solutions,” she explains.

Looking at the big picture

Kristina Orehounig started with the simulation of individual buildings. “But it quickly became clear to me that it was not enough to look at a building in isolation.” That's why she expanded her focus to the boundary conditions. This includes, for example, the microclimate that surrounds a building. She went from individual buildings to areas and districts until she finally ended up at entire cities. “Fortunately, I like interconnected thinking – I like the challenge of keeping an eye on the big picture, but still plunging into the depths of the material at some central points.”

After six years as a researcher and lecturer at ETH Zurich, Orehounig has headed the laboratory  “Urban Energy Systems” at Empa since February 2018. Its name says it all: the laboratory conducts research into networked energy systems with the aim of massively reducing the energy requirements and CO2 emissions of buildings and neighbourhoods. More than 20 researchers from different disciplines are working together to achieve this goal: The disciplines represented are civil engineering, mechanical engineering, electrical engineering, architecture, environmental technology and the relatively new field of industrial ecology, which deals with material and energy flows through industrial systems.

You can feel Orehounig's enthusiasm for energy topics – and research in general. Is there enough time for it, in addition to the management tasks involved in leading a research group? “To be honest, at the beginning I was afraid that the management part would become too large. But fortunately there is a great team spirit in the group – even though we recently merged several labs. Everyone has his or her area of expertise and at the same time all team members are very open minded. The result is a great interdisciplinary team that works together very well.” This even allows her to continue giving lectures at ETH Zurich for the Master's programme “Integrated Building Systems”. During her time at ETH Zurich, she helped to set up and coordinate this programme.

From simulation to reality

At first glance, simulating energy systems in buildings, neighbourhoods and cities sounds somewhat abstract. But when you listen to Orehounig, you quickly notice that the researchers are dealing with very real – and urgent – challenges. After all, the energy demand of buildings accounts for more than 40% of the total energy demand in Switzerland – and according to the Swiss Energy Strategy 2050 this must change. The Swiss Competence Center for Energy Research on Future Energy-Efficient Buildings & Districts (SCCER FEEB&D), which is headed by the Urban Energy System, has set itself the goal of reducing the ecological footprint of buildings in Switzerland by a factor of three by 2035.

To this end, Orehounig's team is working together with cities and municipalities on energy concepts in which the researchers can use their simulations to help clarify specific issues. For example: Is it still worth operating a gas network? Wouldn't a thermal network make more sense? Or a combination of the two? “We receive many enquiries for such projects,” says Orehounig. However, there is not enough capacity to handle all of them – even if it is planned to expand the team to around 30 people. “When selecting projects, a central criterion is whether it advances our research or whether we encounter a new exciting question. Our most im-portant research goal is to scale up the simulation platform we have developed: At the moment, we are mainly simulating neighborhoods, but in the future we want to simulate entire cities.”

The platform will soon make the leap from research to industry – and a new start-up is to be created to enable energy companies and engineering consultants to use Empa's modelling tools to design and opti-mise energy systems for entire neighbourhoods.
And it can be even more real. Orehounig: “The 'Energy Hub', ehub for short, at NEST makes it possible to verify at least part of our research work on a real neighborhood – and of course to make it visible.” This is also an essential point for their research partners: “Most people would like to carry out a project involving the ehub – and thus demonstrate what is possible in the real world.”

After almost a year as head of the laboratory, Orehounig has now settled in well – and is already making plans for the future: “In addition to scaling our models, 'Big Data' is an important keyword. We want to measure more, for example with smart meters. We want to combine these data with the simulations. Another goal is to include mobility, for example through move, the Empa demonstration platform for sustainable mobility. One possibility, for example, is to use electric vehicles as intermediate storage for solar electricity.”

One doctoral student is also already working on a goal that is particularly close to Orehounig's heart: to enable developing countries to have a renewable energy future. “The global impact of our research is important to me. And there is great potential in developing countries in particular: if the rapidly increasing energy consumption there is covered by fossil energy, then we have no chance of stopping climate change. Here our tools can help predict future energy consumption and implement longterm, sustainable planning.”