How protons move through a fuel cell

Hydrogen is regarded as the energy source of the future: It is produced with solar power and can be used to generate heat and electricity in fuel cells. Empa researchers have now succeeded in decoding the movement of hydrogen ions in crystals – a key step towards more efficient energy conversion in the hydrogen industry of tomorrow. 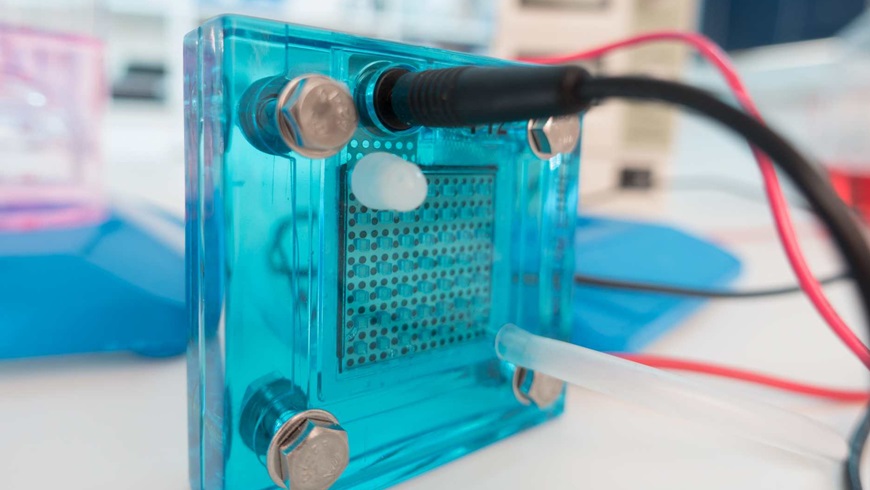 As charge carriers, electrons and ions play the leading role in electrochemical energy storage devices and converters such as batteries and fuel cells. Proton conductivity is crucial for the latter; protons, i.e. positively charged hydrogen ions, are formed from hydrogen, which is used to power the fuel cell. Empa physicist Artur Braun and Qianli Chen, a doctoral student at ETH Zurich, conducted neutron scattering experiments on the Swiss Spallation Neutron Source (SINQ) at the Paul Scherrer Institute (PSI) that document the mobility of protons in the crystal lattice. In the process, they observed that the proton movements in ceramic fuel cells obey far more complex laws than previously assumed: The movement of the protons takes place according to the so-called polaron model, as the researchers recently reported in the renowned journal Nature Communications. 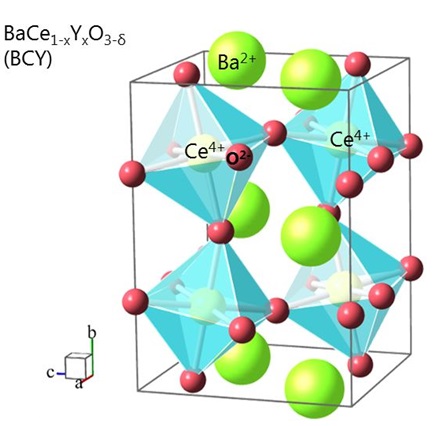 The experiments have been conducted with Barium ceric oxide. The crystal is non conductive in a dry state. When moisture comes in, the protons form OH-bondings and move through the crystal.

For a long time, the polaron theory developed by the Russian physicist and eventual Nobel Prize-winner Lev Davidovich Landau in 1933 only applied to electrons. The model describes how electrons “worm” their way through a dielectric crystal and force “interfering” atoms out of position, which slows down the electrons. In other words, polarons are waves of movement in the crystal, the spread of which can be described as the trajectory of a particle. They can be deflected and reflected.

The electron polaron has long been a pillar of theoretical physics and the undisputed basis for applied model calculations in expert circles. By contrast, the existence of a hydrogen polaron – i.e. a hydrogen ion that “hops” from one position to the next – was only a speculative theory until now. Although biologists used the model of hopping hydrogen atoms to explain certain metabolic processes, solid-state physicists did not regard hydrogen polarons as a valid explanatory model.

This could now change: Based on experiments using yttrium-doped barium ceric oxide and barium zirconium oxide crystals, Braun and Chen managed to prove the existence of the proton polaron. In a dry state, these crystals are non-conductive. If they are exposed to a steam atmosphere, however, OH groups form inside the crystal structure. Released protons can then move in a wavelike fashion and the oxide becomes ionically conductive.

Braun and Chen found evidence of hydrogen ion waves by studying the crystals under different high pressure conditions and at temperatures of up to 600 degrees Celsius. Empa’s good connectivity in the scientific world was pivotal: The samples were x-rayed on PSI’s neutron source and the high pressure experiments on the crystals were conducted in conjunction with researchers from the Faculty of Geosciences/Geography at Goethe University, Frankfurt am Main.

The result: At temperatures of between 220 and 520 degrees, the conductivity increases to exactly the same extent as predicted in model calculations for the lattice vibrations of the crystal. The protons are therefore initially bound in the crystal lattice and begin to hop through the crystal from one OH group to another in the concert of lattice vibrations when heated. If the crystal is exposed to high pressure with a special compactor, there is less space for the proton leaps and the conductivity drops again. This proves that the polaron model applies to both electrons and protons. “And who knows, perhaps the theory also holds true for other ions such as lithium,” speculates Braun.

The Empa researchers’ findings could soon yield vital information on the choice of material for fuel cells and hydrogen storage systems – and thus influence the energy supply of the future. However, the behavior of ceramic insulators can also be gaged more effectively now: Do they still insulate well in high temperatures in the humid outside air? Or do current leakages develop that can be attributed to polaron conduction? Thanks to Braun and Chen’s project, which was funded by the Swiss National Science Foundation (SNSF), certain riddles of materials science can thus be solved.