A team of Empa acoustic researchers has built macroscopic crystal structures that use internal rotation to attenuate the propagation of waves. The method makes it possible to build very light and stiff materials that can also "swallow" low frequencies very well, as they report in the journal Nature Communicatons. 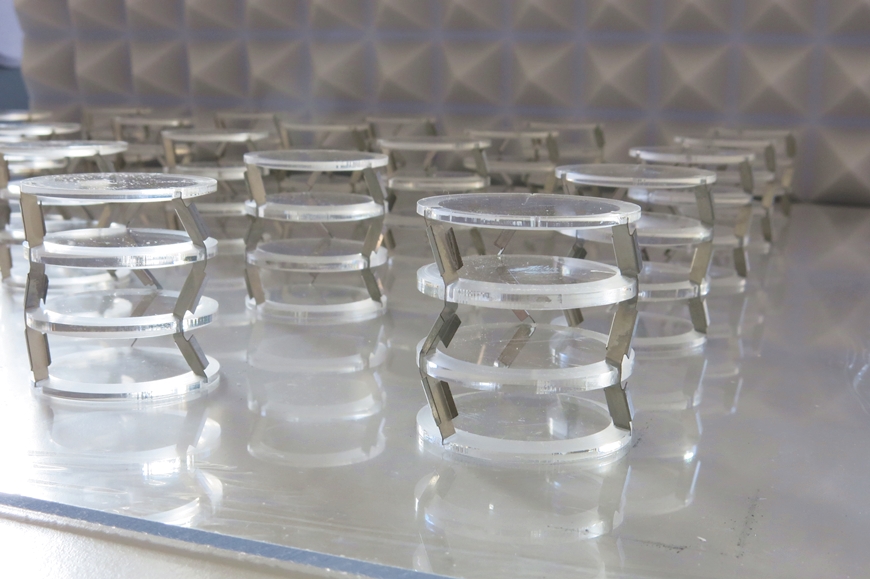 The world of crystals offers many interesting properties: crystals can strike electric sparks in disposable lighters, for example, they can produce polarized light and they can scatter bundled X-rays into thousands of individual reflexes that are refracted in all spatial directions.

Some of these properties are retained even if the atomic crystal structures are enlarged about 100,000,000 times and the crystals are replicated on a large scale. Physicists have been taking advantage of this for several years now: If the original crystals scatter X-rays with very short wavelengths, the enlarged copies can scatter oscillations with long wavelengths in all directions. A very elegant way for vibration damping has thus been found. Enlarged crystal structures with such acoustic properties are called phononic crystals.

Andrea Bergamini and his team from Empa's Acoustics / Noise Reduction Department have now succeeded in integrating additional properties into the crystals that are not present in the originals. The researchers built small, rotating plates into the crystal structures, which are able to convert oscillations along the longitudinal axis into torsional movements. For the first time, an undesirable oscillation can not only be scattered in different spatial directions, but can also be converted into thermal energy. Andrea Bergamini from the Acoustics/Noise Control Lab in Dübendorf 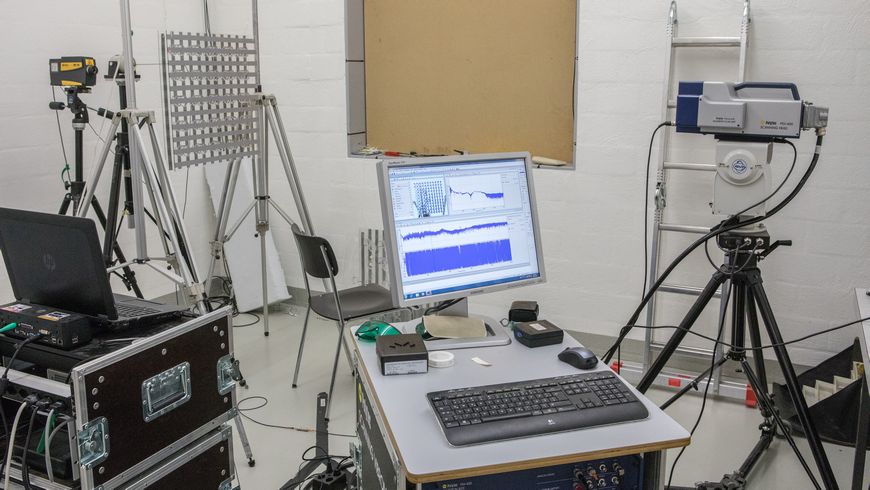 Ultrasonic vibration measurement on the model of the chiral phononic crystal. The results are very promising. Photo: Empa

In a next step, Bergamini and his research colleagues coupled several of the rotating disks in the crystal together. This can be done in two different ways: either all disks rotate in the same direction (isotactic arrangement) or they are alternately connected to each other with their rotational directions (syndiotactic arrangement). The effect differs dramatically: the syndiotactic ABAB arrangement of the direction of rotation creates a so-called frequency band gap. A wide range of oscillations is "swallowed" by the rotation mechanism and not passed through the crystal. On the other hand, the isotactic AAAA arrangement of the rotary motions generates new waves with similar frequencies, which are transmitted through the crystal. A mechanical component with certain geometry therefore determines whether the crystal is insulating or conducting. The team has now published the research results in the current issue of the journal Nature Communications.

But how can such oscillation frequency band gaps be used? In the meantime, a first model has been developed in the laboratory showing a possible function of phononic crystals: Bergamini built a window from two Plexiglas plates in which rotating discs in syndiotactic arrangement are integrated. The size of the discs is tuned to the frequency of human speech. The idea: when certain frequencies are filtered out of speech, the spoken content becomes incomprehensible to the listener. The human brain can no longer assemble the acoustic information into a meaning. First tests in the acoustics laboratory show: the approach is very promising. You can clearly see the talking people and also hear who is talking in a muffled way. But not a single word can be understood clearly from the spoken text. The " cryptography window" is a possible application for phononic crystals. It distorts speech purely mechanically - without electronics or electricity. Image: Gian Vaitl / Empa

Soundproofing elements that are a hundred times lighter?

Bergamini and his colleagues expect that transparent, phononic crystals could be interesting for architects and interior designers. This physical trick makes it possible to produce rigid building materials with a stable shape that insulate sound very well and can be up to 100 times lighter than other phononic insulating materials which have the same effect. In mechanical engineering, aircraft construction and lightweight automotive construction, too, the filtering out of interfering frequencies with lightweight designer insulating materials could soon play a major role.