Paving the way for hydrogen mobility

Hydrogen mobility in Switzerland is picking up speed. The mobility demonstrator "move", which Empa opened in Dübendorf about three years ago with the support of the Swiss Federal Office of Energy (SFOE) and various industrial partners, laid an important foundation stone for this and has been continuously developing since then. The goal is nothing less than the decarbonisation of future mobility – thanks to renewable fuels such as hydrogen. 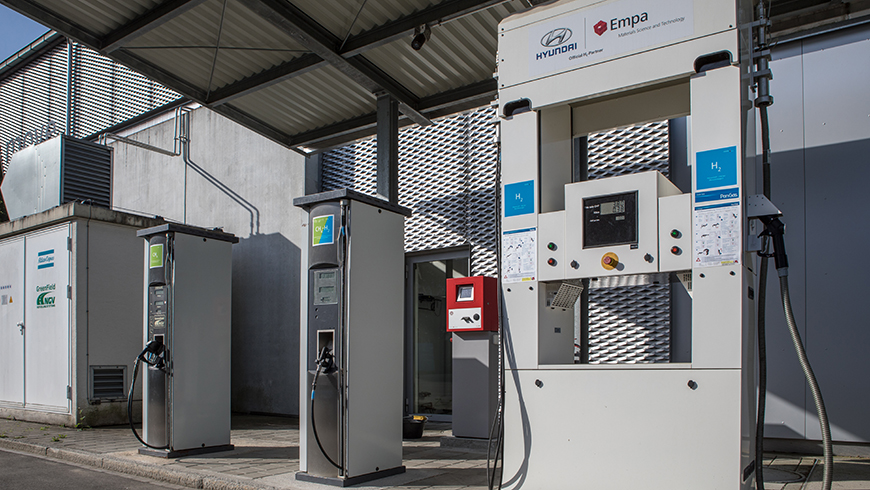 What does mobility based entirely on renewable energy look like? With this question in mind, Empa researchers initiated the "move" research and demonstration platform in 2015 together with partners from the public sector and industry. Designed as the charging and filling station of the future, "move" can be used to refuel electric, hydrogen and gas vehicles. The basis for the production of the fuels is provided by temporary excess electricity, for example from photovoltaic systems, which otherwise cannot be used directly. For electric vehicles, the electricity is temporarily stored in a battery and is then also available at night at charging points. For hydrogen vehicles, an electrolysis plant converts the electricity into hydrogen, known as the "power-to-gas" concept (PtG; see box). In a further step, the hydrogen could then be converted with carbon dioxide (CO2) in a catalyst to methane (CH4), the main component of natural gas and biogas.

As part of "move" and with the support of the Swiss Federal Office of Energy (SFOE), H2 Energy and Hyundai, the first two 700bar hydrogen filling stations for refuelling passenger cars have been built throughout Switzerland in recent years; the first was put into operation in October 2016 in "move"; a month later the second filling station followed in Hunzenschwil, built by Coop and H2 Energy.

Newly developed METAS device for the calibration of hydrogen filling stations. (Photos: Empa)
At the national and international level, however, there are still questions regarding calibration capability and the measurement of quality at hydrogen filling stations. The determination of the exact mass and thus the billing of the refuelled hydrogen is still too imprecise. As part of "move", the Swiss Federal Institute of Metrology (METAS) has therefore developed a new calibration device. This calibration device and the measurements at Empa now form a valuable basis for further investigations within the framework of a European project in which several metrological institutes from different countries are involved.

One of these possibilities is a standardized leak test before each hydrogen refuelling. "This can be used to determine whether there is a leak in the fuel system between the dispenser and the vehicle tanks. In such a case, refuelling would not be permitted," explains Cabalzar. Extensive tests and calculations on the existing systems have shown under which conditions a leak test functions reliably. "This makes it much easier to integrate hydrogen into conventional filling stations," says the Empa researcher.

Bringing clarity into the approval process

"In general, the approval process for hydrogen filling stations is still very confusing both for filling station builders and for the authorities and specialist bodies involved," explains Urs Cabalzar. The findings from the construction and operation of the hydrogen filling stations in Dübendorf and Hunzenschwil are now being incorporated into a guideline that explains the approval process for hydrogen filling stations step by step and will soon be available. The guideline will be drawn up together with the Association of Cantonal Fire Insurance Companies (VKF), Suva and other authorities and specialist bodies and will therefore be widely supported and accepted.
Further information
Urs Cabalzar
Automotive Powertrain Technologies
Phone +41 58 765 59 52

Analysis of Potentials of Power-to-Gas in Switzerland
Power-to-Gas (PtG) is the conversion of electricity into chemical energy carriers such as hydrogen, methane and liquid hydrocarbons. A team from Empa and PSI led by Sinan Teske has carried out a study on the potential of these technologies in Switzerland. Due to the expected expansion of photovoltaics, large electricity surpluses are to be expected in the future. However, electricity surpluses will also lower market prices at the same time, which will slow down the further expansion of photovoltaics in the longer term. In this context, PtG technologies are a sensible solution for transferring renewable electricity surpluses from the electricity sector to other sectors (e.g. mobility) – and thus creating incentives for long-term PV expansion. The researchers conclude that in the near future the sale of PtG products is likely to be most economical in the mobility sector, where energy costs are relatively low as a proportion of total costs and the pressure to reduce CO2 is high. Assuming that 50% of all roof areas well suited according to the SFOE would be equipped with solar cells in the coming years, this would result in a good 24 terawatt hours (TWh) of electricity. Around 40% of this is considered surplus electricity, as it cannot be used directly. This could be used to produce around 6.5 TWh in the form of hydrogen or around 5 TWh in the form of synthetic methane. The study is available here.
Further Information
SL Teske, M Rüdisüli, C Bach, T Schildhauer; Potentialanalyse Power-to-Gas in der Schweiz; Zenodo (2019); doi:10.5281/zenodo.2649817 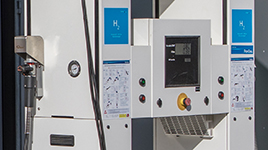