The Royal Military College of Canada has bestowed an honorary doctorate on the Empa’s Deputy Director, Prof. Urs Meier, the first such award to an Empa staff member for 38 years. In his speech of laudation Prof. John Scott Cowan, the Rector of the Royal Military College of Canada, described Urs Meier, a Professor of many year’s standing at the Swiss Federal Institute of Technology in Zurich, as “a tireless friend of Canadian civil engineering” and as “the spiritual force behind Canada’s success in the field of carbon-fiber reinforced structures”. The award ceremony, during which Prof. Meier was presented with his doctoral mortar board, took place on November 4th in . The full text of Prof. Cowan’s laudation in English and French follows. 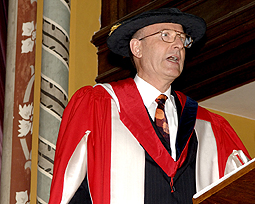