At Empa’s new Coating Competence Center, which has just opened, tailor-made surface technologies find their way from the research labs to marketable industrial applications. The center boasts diverse coating systems for hard coats, flexible photovoltaics and organic electronics, not to mention 3D printers for metallic and bio-composite materials. In terms of process technology, the equipment is on an industrial scale, but it contains modifications that enable the researchers to conduct detailed process analyses. This should make the upscaling easier for Swiss industry and give it an innovative edge among the international competition. 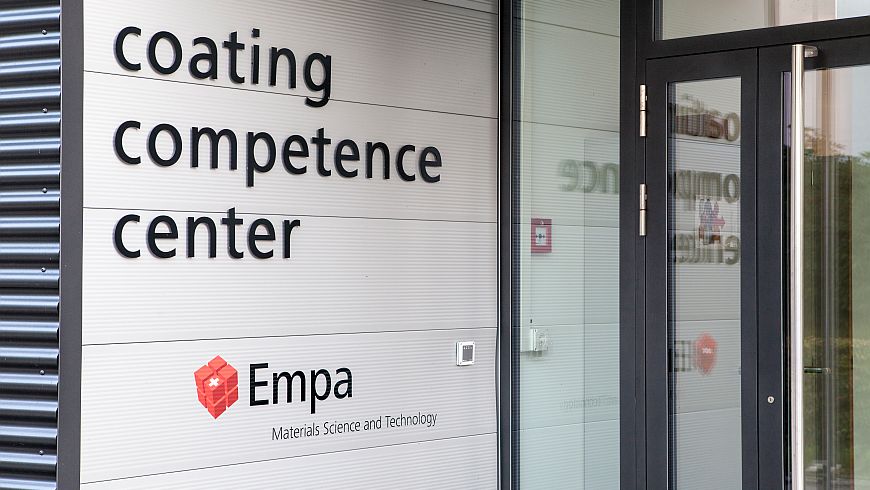 On Thursday, April 7, Empa‘s new Coating Competence Center (CCC) was inaugurated in the presence of 130 guests from industry and politics. The CCC should provide answers to fresh challenges that Switzerland’s mechanical engineering, electrical and coating industry will face in the near future. To survive on the global markets, an increasing number of tailored solutions are called for. This especially goes for coatings, whether they be novel, even more wear-resistant hard layers or intelligent multi-layer systems with specific functional properties. Flexible solar cells, a promising technology of the future, also consist of a sequence of thin layers, which are vapor-deposited in an ultra-high vacuum. Even this kind of complex layer structure can be realized on industrial-scale equipment at the CCC, i.e. not just on a laboratory scale.

Innovation catalysts at the interface between research and industrial application

The CCC therefore stands right at the interface between application-oriented research, as conducted in numerous Empa labs, and the industrial application of innovative technologies in the coating sector, a branch of industry where many Swiss companies – even traditionally – play a leading role globally. At the CCC, scientists and engineers work together on pilot plants, which mirror industrial production plants. This enables processes that echo those that take place in large-scale industrial serial production to be simulated and, if need be, optimized and honed. At the same time, the Empa researchers are able to scrutinize all the process steps with state-of-the-art analysis methods and thus gain a fundamental understanding of them. “This quickly yields insights that significantly reduce the effort involved in upscaling to industrial plants for companies,” explains Pierangelo Gröning, Head of the CCC and member of Empa’s General Management – a major advantage as it is precisely this upscaling from laboratory to industrial scale that is technically demanding, longwinded and thus expensive for firms.

The next step: a “Center for Advanced Manufacturing”

As a result, Empa runs the CCC in close collaboration with Swiss industrial partners. It is to be expanded further in the next few months and equipped with additional facilities. In the long term, the CCC should even develop into the Center for Advanced Manufacturing, where the collaboration between research and industry is extended to other areas of production and manufacturing technologies. The ideal sponsorship for this would be a public private partnership, where research institutions and Swiss industry are equal partners. “Pre-competitive research is very expensive and highly unlikely to succeed without financial support from industry,” says Gröning. At the same time, it is a vital step towards translating scientific discoveries into innovative products.

At the inauguration of the CCC, the visitors already had the opportunity to witness various systems in action – such as two cutting-edge 3D printers for so-called “additive manufacturing”. One printer can turn metal powder into prototypes and serves the development of novel metal composite materials, the other processes emulsions and bio-materials. The latter is used for tests with novel composite materials made of cellulose crystallites in a polymer matrix, for instance. Other CCC equipment produces printed electronic components from organic substances. These electronics are considerably cheaper to make than existing customary silicon components. Prototypes of electronic circuits or OLED light fixtures can be produced on a special high-precision printer, for example.

Images from the event