Greenhouse gases are the cause of climate change. The European infrastructure network ICOS (Integrated Carbon Observation System) is committed to standardised measurements so that emissions can be compared across Europe. After a lengthy transition process, the measuring station in Davos now meets the high quality requirements and is an officially labelled site in the network. 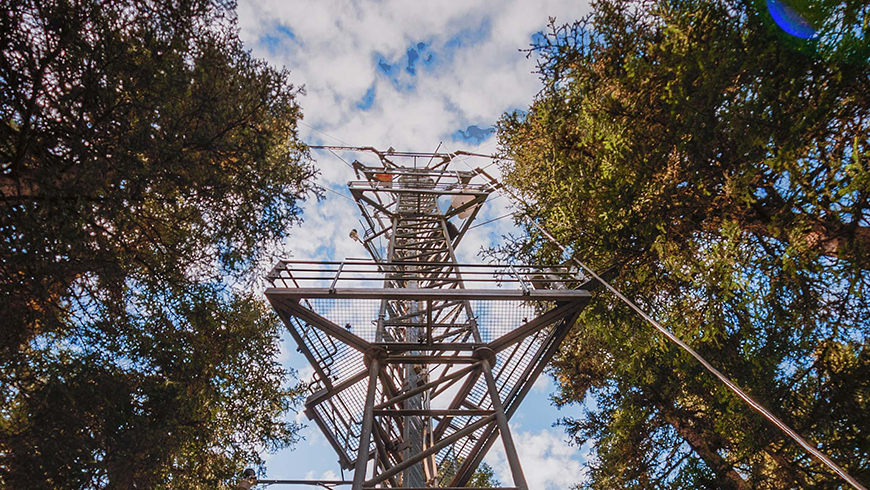 35-metre measuring tower at the ICOS station in Davos. Photo: Lukas Hörtnagl.
In the past, measurements of carbon dioxide (CO2), water vapour (H2O), methane (CH4) and nitrous oxide (N2O) were carried out throughout Europe using different measurement and analysis methods. Thus, the results were not always comparable. However, important decisions regarding climate change must be based on a solid, comparable data basis, one of the goals of ICOS. There are currently twelve countries with more than 140 stations in the ICOS network across Europe, including atmosphere, ocean and ecosystem stations.

Since the beginning in 2008, Switzerland has been involved in ICOS with two measuring stations: the atmosphere station Jungfraujoch, which was officially labelled in May 2018, and the ecosystem station Davos, which was now labelled on 21 November 2019. Both stations are unique in terms of their geographical location, station history and integration into national and international research. As Class 1 stations, they also meet the quality requirements of the highest category.

“Greenhouse gases do not stop at borders,” emphasises Nina Buchmann, Professor of Grassland Sciences at ETH Zurich and Head of ICOS Switzerland. “Therefore, it is important for our research to collaborate internationally and to collect reliable and comparable data.”

To have Davos recognised as an official ecosystem measuring station, measurement methods, installations and data collection had to be adapted to the strict quality criteria of ICOS. “This transition to implement the new guidelines took a total of six years and could only be achieved thanks to the close collaboration of all involved institutions,” reports Dr. Susanne Burri, Coordinator of ICOS Switzerland.

The Davos station is of particular value to ICOS because it is the only Class 1 subalpine forest station within the ICOS network. Since 1997, the CO2 and H2O exchange has been continuously measured in Davos, which represents one of the longest series of measurements for forests globally. Already since the 1980ies, WSL has been conducting research at this site.

ICOS Switzerland consists of the partners ETH Zurich, Empa, WSL, University of Bern, University of Basel and MeteoSwiss, and has been funded by the Swiss National Science Foundation (SNSF) and internal funds since 2013. All ICOS data and data products such as maps and international comparisons are openly accessible from the ICOS “Carbon Portal” and, therefore, are not only available to the scientific community, but also to politicians, administrations and the public.