A research team at Empa and ETH Zurich has developed single crystals made of lead halide perovskites, which are able to gage radioactive radiation with high precision. Initial experiments have shown that these crystals, which can be manufactured from aqueous solutions or low-priced solvents, work just as well as conventional cadmium telluride semi-conductors, which are considerably more complicated to produce. The discovery could slash the price of many radio-detectors – such as in scanners in the security sector, portable dosimeters in power stations and measuring devices in medical diagnostics. 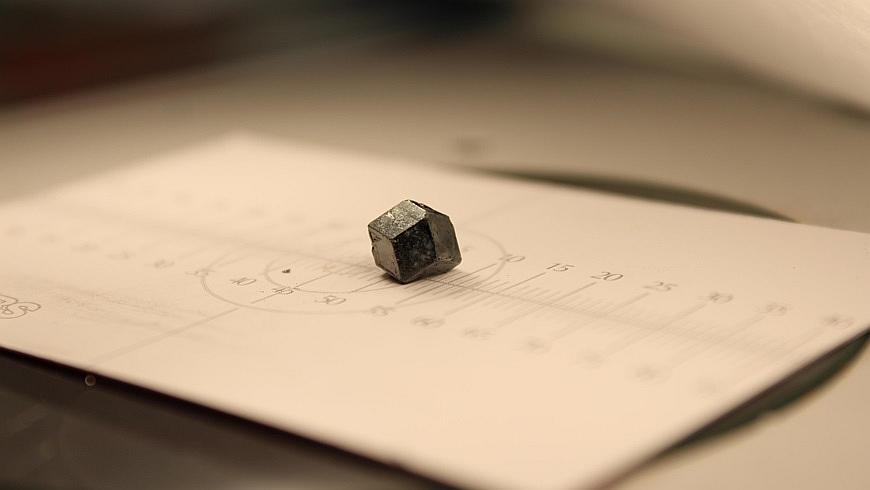 Gamma photons virtually always accompany the radioactive decay of unstable isotopes. In order to identify radioactive substances, cost-effective and highly sensitive gamma detectors that work at room temperature are thus in great demand. Finding suitable substances, however, is easier said than done, as Maksym V. Kovalenko, a professor at ETH Zurich and research group leader at Empa explains: the coveted semiconductor has to be of an outstanding electronic quality, i.e. exhibit a high mobility and lifetime of carriers, along with a low density of trap states as well as of intrinsic carriers at room temperature. Second, it must be composed of heavy elements that can absorb highly energetic gamma photons. Third, it should be possible to grow large single crystals of this material and these crystals must be stable, both mechanically and thermally.

Thus far, only cadmium telluride (CdTe) had fulfilled these requirements. However, the substance also used to produce thin-film solar cells is not water-soluble and only melts at temperatures above 1,000 degrees Celsius, which renders the production of detector crystals complicated and expensive. Kovalenko and his team have now succeeded in manufacturing single crystals from another family of novel semiconductors (lead halide perovskites) in a usual glass beaker at a cost of just a few Swiss Francs per crystal. These crystals can be used as highly sensitive detectors for gamma radiation, as the researchers recently reported in the journal Nature Photonics. One possible application might be a mini Geiger counter, which can be connected to smartphones. This might enable people in contaminated areas, for instance, to test their food for radioactivity.

Another potential field of application for the new crystals is diagnosing metabolic problems in the brain. Dopamine receptor disorders can have numerous consequences: Parkinson’s, schizophrenia, hyperactivity (ADHD), social anxiety disorders or drug addiction and alcoholism. These disorders are diagnosed by giving patients radioactive tracer substances, which render the brain activity visible in magnetic resonance imaging (MRI). Administering radioactive substances is not without its hazards, though: if the substance is impure, it can have adverse health effects. However, its purity has to be verified swiftly as the tracer substance has a rather low half-life, which means it degrades rapidly.

In order to demonstrate the “capabilities” of lead halide perovskites, Kovalenko’s team used the new single crystal detector to test the isotope purity of 18F-fallypride, a tracer substance used in clinical trials on dopamine receptors. 18F-fallypride is radioactive and has a half-life of 110 minutes, which means there is precious little time to test the substance’s radioactive purity between its production and injection.

So far, purity measurements have been conducted in an elaborate, two-step process: first of all, the substance is separated using the high-performance liquid chromatography technique. In the second phase, the radioactivity is then measured with a detector. Thanks to the new crystal, the researchers were able to reduce this two-stage process successfully to one simple step. The crystal merely needs to be held in front of the tracer substance to take the readings.

Fluorescent dyes of a new generation 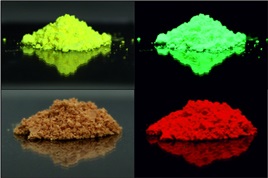 Lead halide perovskite crystals not only can detect radiation but can also serve as a novel class of brightly fluorescent “inorganic pigments”. In 2015 Maksym Kovalenko’s Team discovered that colloidal lead halide perovskite nanocrystals emit bright light in the entire visible spectral range and are stable in ambient air. Most importantly and contrary to nearly all conventional quantum dots, these novel phosphors do not require laborious encapsulation into other matrices for bringing about their bright luminescence.

In their latest paper, recently published in “Nano Letters”, they describe how to prepare such nanocrystals in an easy way. They drenched mesoporous silica with a perovskite precursor solution and simply dried out the solvent. The nanocrystals – formed and encapsulated in the silica matrix – exhibit a very bright photoluminescence, both with visible light and under UV radiation. The color of these “inorganic dyes” can be tuned by both quantum size effects as well as by the chemical composition of the crystals. Also exhibiting intrinsic haze due to scattering within the composite, such materials may find applications as replacements for conventional phosphors in liquid-crystal display technologies in future flat-screen TV’s.