Another European Space Agency (ESA) satellite was launched last October: BepiColombo who is  heading for Mercury  – with Empa technology on board. Empa coated and soldered individual components meticulously for time-of-flight mass spectrometer sensors. While BepiColombo is now on its long journey, Empa expertise will also be embarking on future ESA missions. 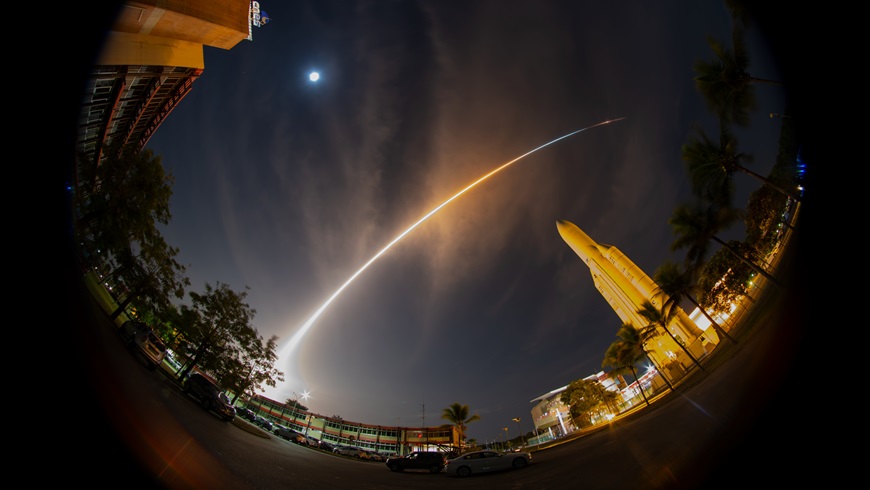 A large arc in the night sky over Kourou: BepiColombo lifted off from the European spaceport in French Guiana on 20 October 2018. Its destination: Mercury. Image: ESA

The destination: Mercury, the innermost planet of our solar system. The space probe BepiColombo, which was named after Giuseppe (Bepi) Colombo, lifted off in October 2018 and embarked on the long voyage to the nearest planet to the sun with a view to mapping it and determining the geological and chemical composition of its surface. One of the instruments on board is a time-of-flight mass spectrometer, individual components of which were developed at Empa.

Hans-Rudolf Elsener from Empa's Joining Technology and Corrosion lab co-developed and built a heatable metal ceramic structure in a complex process. The coated silicon wafers mounted on it convert neutral particles into charged ones. Thanks to the Empa heaters, this conversion is far more efficient than without them as deposits of organic substances combined with cosmic radiation would irreversibly damage the coated little plates. The regular heating ensures that the instrument’s measurement sensitivity will not be compromised.

Lack of space in Space

As space probes need to be lightweight and the space on them is limited, weight is cut wherever possible, even on the tiniest of components. Take the heated structure for the European and Japanese space mission to Mercury, for instance. Screws and wiring are problematic and waste space. Therefore, the components need to be soldered, which causes additional difficulties. Elsener joined the heater structure made of titanium and aluminum oxide ceramics with gold germanium in a vacuum furnace. In doing so, he had to be careful not to damage the various heater components during the soldering process.

Ceramics are extremely heat-sensitive, and soldering materials with different thermal properties causes high mechanical tensions that can damage or even destroy components. Therefore, Elsener begins by coating all the components in the metal ceramic structure so that he can solder at far lower temperatures thanks to the coating. The components thus survive the soldering process unscathed. This calls for a complex interplay between material knowhow and manual dexterity.

Elsener prints, coats and solders the delicate ceramic parts on behalf of the University of Bern, and can fall back on many years of experience. After all, besides BepiColombo, more missions are on the horizon. For instance, Elsener also made ceramic heaters for the ESA missions CHEOPS and JUICE (see box below), and they will also be installed in the upcoming LUNA mission. The finished ceramic heaters are merely 20x15 millimeters in size and 1.3 millimeters thick, which requires the utmost precision. They are produced in a well-oiled collaboration between Empa and the University of Bern where Elsener is also in charge of fine-tuning the heaters. The University of Bern already called upon Empa’s expertise and Elsener’s skilled craftsmanship for the components for the Rosina mass spectrometer for the successful ROSETTA mission that landed on the comet Churyumov-Gerasimenko in 2017.

CHEOPS should be ready for lift-off in early 2019 and help in the search for potentially habitable planets in other solar systems. The satellite measures the brightness of stars, which decreases slightly when an exoplanet passes its parent star. The size of the exoplanet can be determined from the decrease in brightness during one such transit. Institutes from 11 European countries participate in the CHEOPS mission. The satellite itself was constructed at the University of Bern. Hans-Rudolf Elsener produced the five heaters used on CHEOPS in his lab at Empa.

The launch of the Jupiter mission JUICE is scheduled for June 2022. The space probe’s objective is to research the Galilean moons of the planet Jupiter and will lift off from Centre Spatial Guyanais with an Ariane 5 rocket. Empa heaters will support the Particle Environment Package (PEP), which is a particle spectrometer to measure neutral and charged particles. En route to Jupiter, JUICE will conduct swing-by maneuvers past Earth, Venus and Mars before eventually reaching its destination in seven and a half years. Once there, JUICE will then spend three and a half years collecting data.

European Space Agency
Further information about the Rosetta Mission is available on the ESA website.