About 18 months ago, Davide Bleiner took over the helm at Empa’s Laboratory for Advanced Analytical Technologies. And he has big plans – for small things. Right at the top of his wish list is the development of a plasma-based X-ray laser – albeit on a foosball scale. His curiosity and thirst for knowledge have not only taken him around the globe, but also into a vast range of different fields.

Most labs at Empa conduct research into new materials. My lab, on the other hand, develops new measuring methods to observe chemical processes during the application of these materials.” Davide Bleiner has ambitious plans, including for his laboratory, which he renamed “Advanced Analytical Technologies” (from “Analytical Chemistry”). While laser beams were regarded as playthings for atomic physicists half a century ago, they have become an integral part of everyday life. Bleiner’s laboratory works with analytics, which enables even the minutest of parts and concentrations – such as trace levels on a nanoscale – to be quantified. While “normal” X-ray sources, such as in the medical sector, act like a lamp and beams of “white light” radiate in all directions, “colorful” lasers are able to concentrate the beams, focus them on one point energy-selectively and thus illuminate tiny things. The latest developments in laser spectroscopy enable ultra-rapid processes to be observed in real time (“femtochemistry”). Researchers from Bleiner’s laboratory establish these advanced technologies at Empa with a view to specific issues of materials science – such as analyzing combustion processes in engines or the catalytic conversion of hydrogen with CO2 into hydrocarbons. 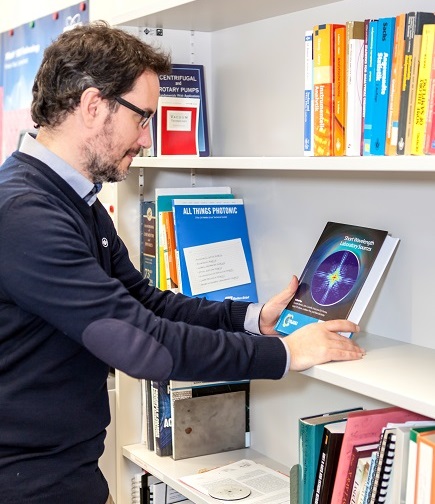 Davide Bleiner holding the book Short Wavelength Laboratory Sources. He is one of the editors of this standard work.
However, the native Italian’s plans go way beyond “mere” routine analytics: his goal is the laboratory application of a so-called “free electron laser” (FEL). This kind of laser has already existed for a few years, albeit only in the form of giant electron accelerators – such as SwissFEL, which is currently under construction at the Paul Scherrer Institute (PSI). Consequently, there are only a handful of them worldwide. “There aren’t many scientists who can plonk a 300-million-ton synchrotron in their lab as soon as they have a brainwave,” says Bleiner. Using one of these synchrotrons takes a lot of preparation and expensive trips, let alone time: for one project, Bleiner’s team usually has to wait anything from six months to one and a half years before they can carry out their measurements – in California, Japan or Italy, for instance. “It would be a huge advantage if everyone could conduct their own experiments in their own lab.” With this in mind, Bleiner and his team are working on a table-top version of a plasma laser. He first examined the topic as an SNSF-funded professor at the University of Bern’s Institute of Applied Physics and worked on and with a table-top X-ray laser called Beagle. “We don’t just want to develop new lab tools, but also optimize the corresponding 24/7 applicability,” says Bleiner, summing up his laboratory’s work.

From the Stone Age to the 21st century

Bleiner owes the fact that he now deals with lasers to a stroke of fortune. The Empa scientist has a geology degree under his belt. Originally, he also wanted to do a doctorate in geochemistry at ETH Zurich but before he could get started, his advisor was given an assistant professorship in analytical chemistry. “He told me that if I wanted to join him in chemistry, there wouldn’t be any field trips, which suited me right down to the ground.” So Bleiner agreed. As his PhD thesis was about the micro-analysis of ore streaks based on laser ablation and the derivation of a mathematical description of the measuring signals, his geochemical knowhow really stood him in good stead.   After his doctorate at ETH Zurich, a position as a project leader at Empa and a two-year stint as a postdoc at the University of Antwerp, where he studied the fundamentals of laser plasma and computer simulations, he returned to Switzerland to take up a post at ETH Zurich – but in mechanical engineering, not chemistry. “An unusual move,” concedes Bleiner, “but then laser expertise is called for in virtually every field.” He teamed up with engineers to develop a laser-powered source of extreme ultraviolet radiation for use in next-generation lithography. “The engineers were grateful for my laser expertise and it was rewarding for me as I was working in an environment – namely fluid mechanics – where I still had plenty to learn.” According to Bleiner, that’s the advantage of switching fields every now and again: “I frequently felt like Forrest Gump in life and found myself in situations without really understanding how I’d got there, but something good always came out of it in the end.”  At ETH Zurich, this included topics such as fluid mechanics and turbines – knowledge that he can now put to good use on a current project at Empa. In conjunction with SR Technics and the Federal Office of Civil Aviation (FOCA), his team developed a measuring technique that is able to gage the fine particle emissions of airline turbines directly, recording even the minutest of particles that are less than a hundred thousandth of a millimeter in size – i.e. less than ten nanometers. (Read more about this project on page 4.) 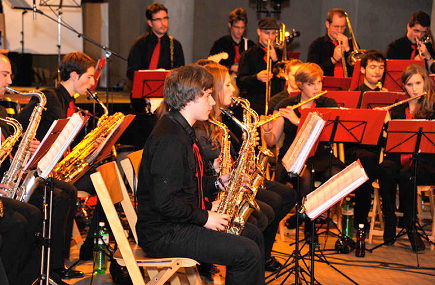 Bleiner is a passionate bassist and plays in jazz bands and classic orchestras.

Bleiner is no stranger to airports, either. Once, his love of travel and physics books even landed him in the soup at Zurich Airport. The customs officials mistook him for a book smuggler when he tried to stroll through customs with a suitcase crammed full of books. He ended up getting slapped with a fine – after all, how could he prove that he was bringing all these books on quantum mechanics across the border for personal use as opposed to trafficking them? He has another passion, too: calcio (football to non-Italians). Although he has hung up his boots as a player, he remains a fan of AS Roma – one of the clubs in his hometown.

That said, he now calls Switzerland his new home. He likes it here and people don’t immediately cotton on that he isn’t actually Swiss. “Most assume I’m from Ticino.” And Bleiner has another fitting anecdote at the ready. Back when he was a PhD student at Empa, someone recommended “going abroad for a few years” because it looks great on your résumé. To which he replied: “But I already am abroad!” Nonetheless, he heeded the advice and worked, among other places, in Belgium, the USA and Italy before eventually returning to Switzerland.

Switzerland: an ideal place for research

Nonetheless, Bleiner is not just looking to bring the subject-specific experience he has gained on his travels through foreign countries and various research fields to the table. Now that he runs five research groups, team spirit is particularly important to him. Apparently, there is no shortage of Lionel Messis in research. “But one Messi doesn’t make a team – you’re missing ten other good people who work together.” That’s why it’s crucial to respond to individual members of the team and create a lab spirit; otherwise, you stop enjoying your work and become dissatisfied. That’s the essence of his reshuffle. For him, exchange programs are therefore extremely beneficial.      He is a prime example of this himself. When he joined Empa after his doctorate more than a decade ago, he underestimated the research environment at Empa. During his stints abroad, however, one thing in particular dawned on him: in Switzerland and especially at Empa, researchers have it cushy, but most of them – like him back in the day – don’t even realize it. He still recalls from his time at the renowned Lawrence Berkeley National Laboratory in the US how five researchers would share an office that was half the size of his present one at Empa – without any windows and just a clapped-out old fan in California’s summer heat; conditions that would be unthinkable in Switzerland.

If at first you don’t succeed…

As a laboratory head, Bleiner no longer works on the analysis equipment or in the lab as often as he used to – not that this is a problem for him. “Eventually, every football player has to trade in his boots for the dugout,” he says. These days, he is more interested in helping budding young scientists. Soon he will be following in the footsteps of his great role model Erwin Schrödinger when he takes up a professorship at the University of Zurich. At Empa, he supervises his PhD students’ projects and, in doing so, keeps seeing new challenges – especially in complicated cases. “When someone says it’s too hard, those are the projects that inspire me the most.”

Of course, he doesn’t advocate that his PhD students should only produce one string of failures after the other for three years. But they stand a far greater chance of stumbling across exciting new findings if things do go wrong every now and then. “If you carry out an experiment and the result is exactly as you’d expected, that isn’t research; that’s an internship. If the results are surprising, however, things start to get interesting!” Bleiner’s own career has been littered with unexpected twists and turns – but that’s a good thing, he insists. “Life is like the movies, not a book. When you read, you can skip to the end and sneak a peek. You can’t do that at the cinema. But somehow it always works out.”
Editor / Media contact