Any cyclist who wears a helmet knows the feeling: heat builds up under your helmet and the sweat starts to flow, especially in summer. As a result, many cyclists will take a risk and not even wear a helmet. A research team at Empa has now studied the flow of heat under cycling helmets in detail – the first step towards "sweat-free" protective headgear. 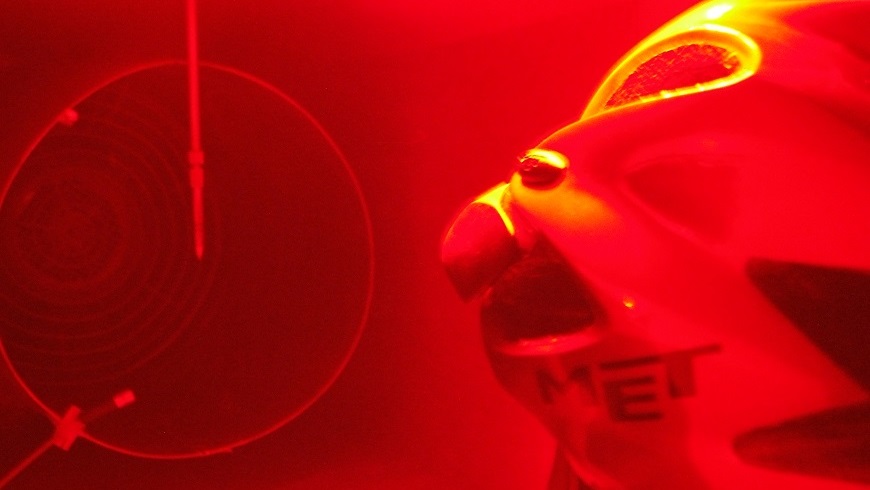 In the laboratory, Empa researchers simulate sunlight and airflow using infra-red light and a fan.

The days are getting longer, temperatures are rising and the cycling season is upon us. Families, tour riders, amateur and professional cyclists, as well as people who cycle to work, want to do something good for their health. And without a doubt, cycling is one of the healthiest sports – as long as cyclists wear a helmet to protect their head. A survey by the Swiss Council for Accident Prevention (bfu) showed that the proportion of cyclists wearing helmets tripled between 1998 and 2015. Yet it is still the case that less than half of all cyclists protect themselves against the consequences of an accident. 53 percent of cyclists wind their way through traffic without protective headgear. Many of those who choose not to wear a helmet justify their approach by saying that it gets too hot underneath the helmet; a decision which, according to the bfu, results in more than 1000 avoidable head injuries per year.

Therefore, improving the thermal wear comfort of helmets could significantly increase the proportion of cyclists who wear helmets; a goal which cycling helmet manufacturers have been working on for some time. They often do this by testing out prototypes on volunteers or relying on in-house practical knowledge. However, both methods have their limitations as they often result in purely subjective statements. Tests using volunteers are also time-consuming and expensive. Researchers have actually been using thermal models for years. However, these usually split the head into only two zones, the facial area and the remaining skull area. For this reason, they allow only limited conclusions about localised heat flow. Yet it is precisely this information which is important for optimising the thermal wear comfort of cycling helmets. The model of a human head that was used recently at Empa is different.

Looking at nine zones on the head instead of just two 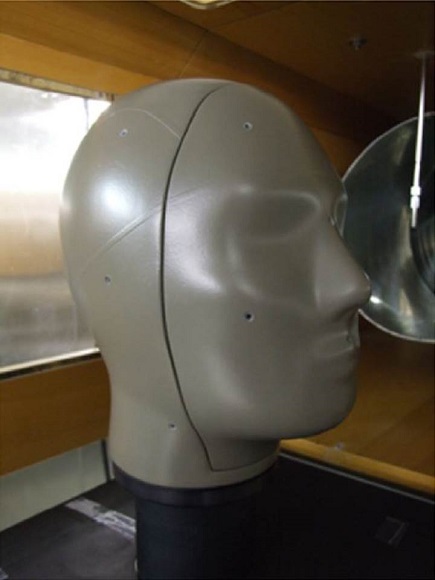 The boundary lines on the surface indicate the division of the head model into nine zones. The openings represent artificial pores through which the model can give off moisture, or "sweat".

The Empa model segments the head into nine zones, allowing researchers to investigate localised heat transfer on individual areas of the head, even small areas such as the temples. This, in turn, enables them to establish how well ventilated the different areas of the head are under the helmet and if the cycling helmet manufacturers' ventilation concepts really work. Ideally, the air passes from the forehead under the helmet, over the head and escapes at the back of the head, or, depending on the model, at the neck area. This removes the heat emitted by the head. The wear comfort should, in theory, come close to an optimum level, but this has so far only rarely been achieved.

In order to compare the new head model with the previous one, the researchers at Empa carried out tests on helmets which were commercially available and simulated sunlight using infra-red light and airflow using a fan. Conclusion: The new, more detailed model proved to be absolutely equal to the previous model, yet with one decisive advantage: the design allowed the localised heat transfer to be analysed in much greater detail.

The scientists then connected their new head model to a virtual thermophysiological full-body model which simulates the reactions of the body caused by the exchange of heat on the surface of the body. For example, if the new head model signals a reduction in heat dissipation or the body absorbs heat through the head, the full-body model triggers the body's cooling system - the production of sweat. These interactions between the head and full-body models enable the researchers to simulate various scenarios, for example: if a cyclist was wearing a certain helmet and cycling at 20 km/h into a slight head wind on a hot summer's day, how would his/her body respond? Also, in what area of the head does the heat accumulate and which areas are well ventilated?

This allows the experts to provide detailed, localised and objective data about helmet designs to manufacturers. This means that manufacturers are not as heavily reliant on costly tests involving test subjects, which are characterised by subjective impressions. For cyclists, there is the prospect of an improvement in wear comfort, which researchers hope will increase the percentage of cyclists wearing helmets, thus helping to prevent injuries.

A vision for head, torso and foot

In addition to the head area, researchers at Empa are working with models for other parts of the body, such as the feet and the torso. The principle is the same: using these models, scientists can study the transfer of heat through textiles and other garments and simulate the expected thermophysiological reactions of the body. According to Simon Annaheim from the Empa's Laboratory for Protection and Physiology, a long-term goal is to develop a model that links various body parts such as the head, torso and foot to the virtual full-body model. The researcher emphasises that this endeavour would be an enormous challenge as the thermal interactions between the body parts would have to be taken into account in the model. In other words: heat flows in one part of the body have an effect on those in other parts of the body. The number of influencing factors increases and the interaction patterns become more complex.