Repetitive mass testing against the pandemic

Since February 2021, the canton of Grisons is using saliva-based PCR mass testing within its mobile workforce as a potential means to contain the COVID-19 pandemic and reduce infection rates. Empa researchers are now leading the analysis of data from the first eight weeks of the testing regime. They observed a reduction in the incidence rate between 20 and 50%, depending on the business sector, and a noticeable reduction in the test positivity rate among those who were regularly tested. This suggests that viral propagation can indeed be contained through regular mass testing. 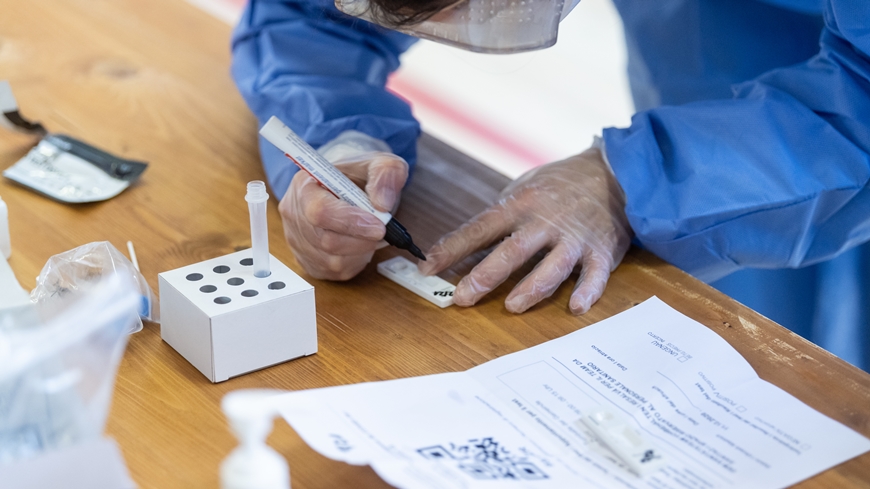 At its peak, the current COVID-19 pandemic has all but brought social and economic life to a virtual standstill. Although lockdowns and social distancing have proven effective in bringing down infection rates and COVID-associated deaths, they did so at considerable costs and thus at far unpredictable medical and psychological long-term effects. Rather than imposing mobility restrictions on the entire population and closing shops and stores, it would be much more desirable to effectively interrupt virus spread by isolating only those who are indeed infected.

What sounds simple in theory, however, is anything but straightforward in the real world. This is because COVID-19 is spread, to a large part, by asymptomatic or pre-symptomatic infected people who are not aware of their propagating a potentially deadly pathogen. Thus, an early detection of infected but symptomless individuals is key to containing the pandemic.

One way of achieving this is by encouraging a large fraction of the population to get tested repetitively by so-called PCR tests (for polymerase chain reaction), followed by asking positive cases to isolate. These tests are capable of sniffing out even minute amounts of viral RNA before the virus is causing any telltale symptoms such as coughing, fever or the like.

Getting ahead of the virus

In 2020, Empa researcher Hossein Gorji together with collaborators at ETH Zurich, has developed a mathematical model to evaluate the effectiveness of possible mitigation strategies, including mass testing. Empa researchers are now collaborating with the canton Grisons to analyze the data collected in the course of the canton's mass testing campaign. 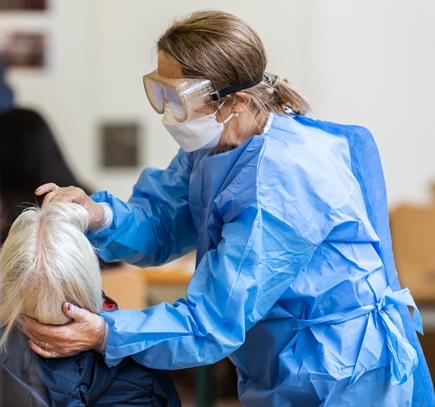 Although the data is still limited, as Gorji is quick to admit, the results are very encouraging: Among regularly tested individuals, the researchers observed a reduction in the incidence rate, that is, the number of infected individuals per 100'000, by 20 to 50%. What's more, the quite significant differences could be pinpointed to various business sectors: Lower reduction values were observed in the tourist industry, higher reduction among employees working in offices and factories. This makes perfect sense, says Gorji, because in tourism and gastronomy, employees would still have a rather large number of job-related social interactions – and thus a higher probability to contract the virus from people not enrolled in the testing program.

This effect is particularly pronounced in regions like Grisons; the canton welcomes almost 200'000 tourists during winter season, 20% of which come from abroad. Early analysis of school testing data seems equally assuring as the number of outbreaks among pupils and students dropped significantly after mass testing was initiated. Thus, mass testing seems to help contain the pandemic. Or, as Empa researcher Gorji puts it: "Repetitive testing puts us ahead of the virus by being able to identify and isolate hidden spreaders."

So what lessons did the researchers learn from the testing program in Grisons? Most important, the data suggest that mass testing works if done repetitively. Yet three things are crucial, adds Hossein Gorji, who is currently preparing a scientific paper about the data collected in Grisons: As many people as possible should be invited to test on a regular basis; the tests should be processed – and virus carriers identified – as fast as possible; and testing has to be continued over an extended period of time – otherwise virus transmission can bounce back to its previous level.

Presentation for media conference on May 7, 2021 in Chur

New scientific paper on the analyses in Graubünden

Current media release of the canton of Graubünden

Research in times of COVID-19: "These results are crucial for the future corona vaccination strategy";
Media Release October 2020