For 13 years, the "bilding" foundation has been committed to promoting the next generation of engineers in the construction industry, which also includes the Building Award for remarkable and innovative engineering achievements in construction. This year's award in the "Research and Development" category goes to NEST, the modular research and innovation building of Empa and Eawag. 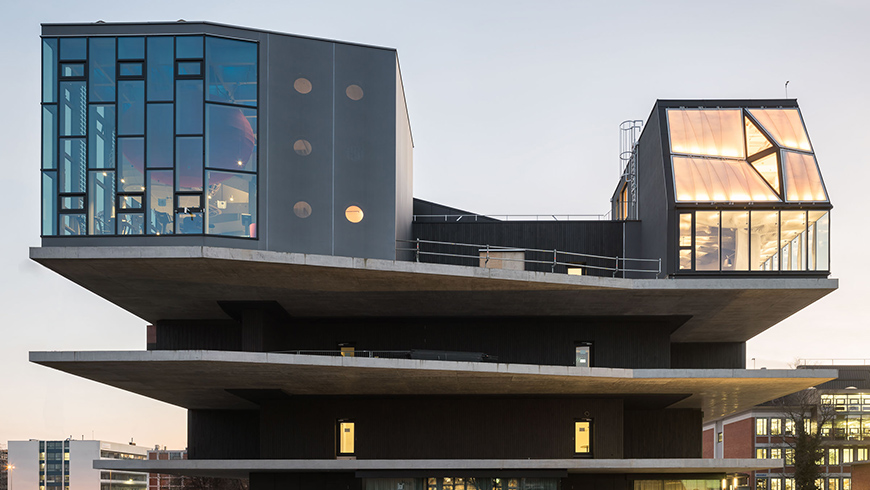 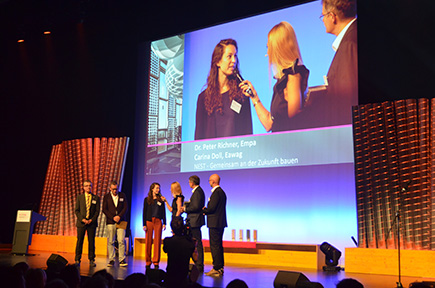 Carina Doll from Eawag and Peter Richner, Deputy CEO of Empa, talking to moderator Christa Rigozzi at the award ceremony.
On 6 June 2019 in the KKL Lucerne, the Building Award was presented for the third time. A total of 21 projects had been nominated. In the category "Research and Development", two Empa projects – NEST and memory-steel – were shortlisted by the jury. In the end, the award went to the modular research and innovation building NEST, which Empa has been operating together with Eawag in Dübendorf since 2016. NEST offers both research and industry a platform, on which new ideas can be implemented, validated and further developed in a real-world environment. "NEST has convinced us through and through," said jury member Patrick Hofer-Noser in his laudatory speech. Since in today's building industry the focus is still too often on the tried and tested it is crucial to have a place where innovations can be tested and experienced, he added. In front of full ranks in KKL's Lucerne Hall Peter Richner, Deputy CEO of Empa, and Eawag representative Carina Doll accepted the award on behalf of the project team.

Steel with a memory 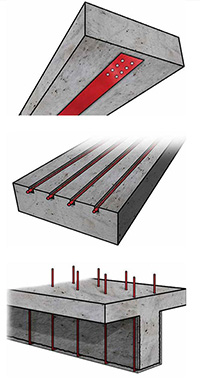 Visualization: Christoph Czaderski
One of the other nominees was memory-steel – a new material used for pre-stressing concrete structures. Developed in around 15 years of research at Empa, it is now marketed by the Empa spin-off re-fer AG. Memory-steel is an iron-based shape memory alloy that contracts during heating and is currently mainly used to reinforce existing concrete structures. For this purpose, reinforcement bars made of memory steel are inserted into an additional concrete layer or inserted into grooves in the concrete covering and connected with mortar. After the mortar has hardened, the memory-steel elements are heated – for example by electric resistance or radiant heaters. Since they can no longer deform due to the surrounding concrete, a permanent pre-stress is created in the memory-steel, which is transferred to the entire structure. In addition to the reinforcement bars, memory-steel in strip form can also be fixed (and heated) directly onto concrete surfaces.
Editor / Media contact
Stephan Kälin
Communications
Phone: +41 58 765 49 93

All winners of the Building Award 2019