Reaching for the sun

Wood has one particular property that tends to cause problems: it swells when it gets wet. As this occurs according to strict rules, however, a team of Empa researchers is looking to produce wooden building components that move automatically. 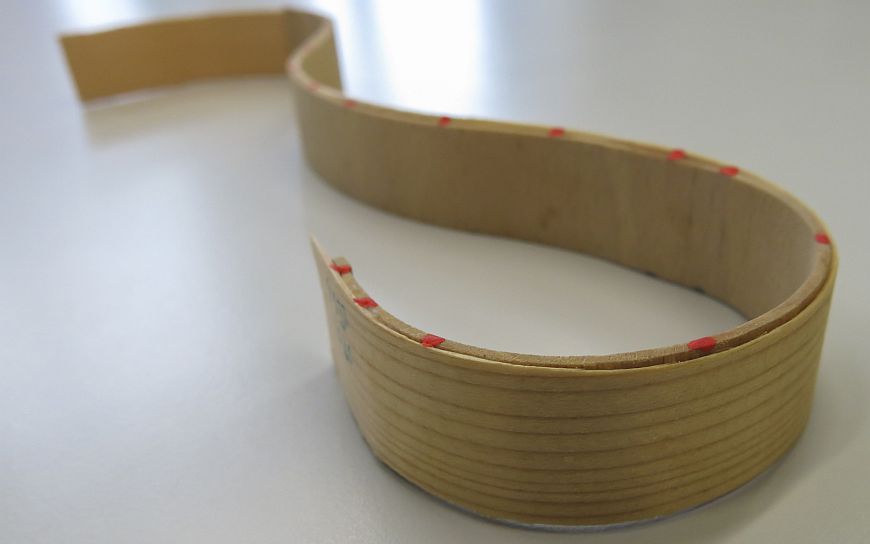 “Even as a child, I’d hold fir cones in my hand and wonder how they opened and closed by themselves,” says Empa researcher Markus Rüggeberg. The answer: humidity. Water vapor seeps deep inside the plant fibers and causes them to swell. But wood doesn’t expand uniformly in all directions; this primarily takes place across the grain. Strictly speaking, this is one of wood’s unwelcome properties. “However, we want to use what others fight against,” says the researcher.

“The principle is pretty straightforward,” says Rüggeberg: “You simply stick two pieces of wood together.” The important thing is the direction of the grain. If they lie at a 90-degree angle to each other and the moisture level in the wood changes, one layer swells or shrinks and the other remains rigid. As both layers are firmly attached to each other, the wood bends like a croissant. Another bending effect is achieved via a 45-degree alignment as the wood twists like a screw.
Rüggeberg is able to predict exactly how much the wood will warp by using a formula that was developed about a century ago to calculate the expansion of metals but also works for wood. However, the thickness of the wood layers needs to be accurate to within a tenth of a millimeter. And the type of wood is also important. Beech, for instance, has very high top swelling coefficients, which makes it just the ticket for particularly pronounced curves.

Always towards the sun

It is easy to see why, of all materials, Rüggeberg chose wood for his research: apart from its swelling properties, the material is strong and sturdy, can be processed easily and is used to build in large dimensions, which makes a range of possible applications possible. For instance, the researcher has already constructed an autonomous device that points solar panels towards the sun. After all, the humidity levels differ depending on the weather and time of day. When the sun rises, it dries out the night-time moisture, which bends the wood attached to the photovoltaic unit and points it at the sun.
“This autonomous tracking already works very well,” says Rüggeberg. His autonomous panels have the advantage of requiring far less maintenance than their electronic counterparts. As a next step, the researcher would like to make the wood movements even more precise so that they can capture even more solar energy in future.