Empa at the Geneva Motor Show

A glimpse to the future

What could the "gas station of the future" look like? What services does it offer? Which fuels can be filled up there and where do they come from? The Swiss Oil Industry Association (Erdöl-Vereinigung) is providing possible answers to these questions with its stand at the Geneva Motor Show, together with its partners, Empa and Hyundai. 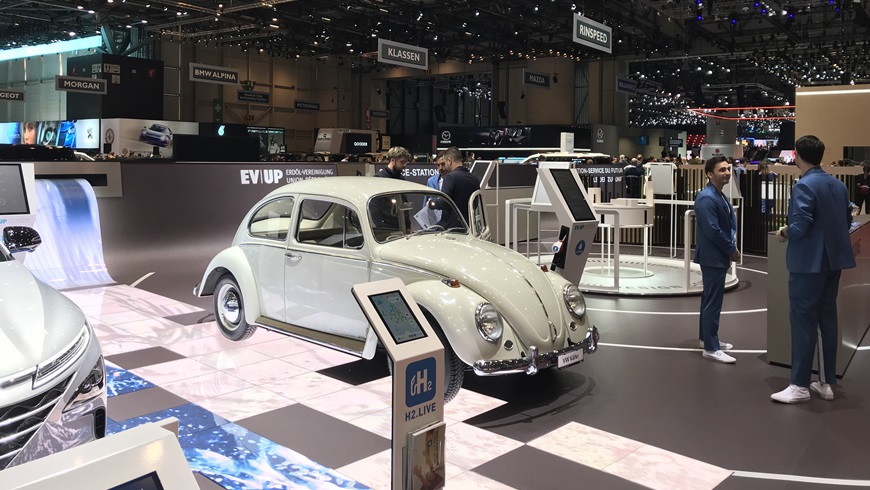 In 2019, the Swiss Oil Industry Association will be visiting the traditional motor show for the second time and will have something new to tell. It will place the gas station at the centre of the fair as a mobility hotspot. Thanks to its infrastructure and logistics, the oil industry plays a key role in the mobility of the future.

The filling station is "always on the move", that's for sure. This is also shown by a national design competition, which was announced and carried out in 2018. The four winning projects will be awarded prizes on 6 March at the stand of the Swiss Oil Industry Association in the presence of the jury and presented to the public for the first time.

Visitors to the fair will also be able to immerse themselves in the world of augmented reality and discover the winning project in the design competition, which won first prize.

As far as possible, we should only use renewable energy for mobility that cannot be used in other sectors, such as temporarily surplus electricity from photovoltaic systems, wind farms and hydroelectric power stations.

Excess electricity can be converted into hydrogen or liquid fuels – so-called e-fuels – and stored. These energy sources are then suitable as CO2-neutral fuels, especially for long-distance driving and freight transport. Today, e-fuels can power existing diesel and petrol engines. Empa is realising and investigating such concepts in its mobility demonstrator "move" in Dübendorf and is testing the production and use of such fuels in reality.

Filling the tank with e-fuels

A VW Beetle built in 1965 in cooperation with AMAG will also be presented at the stand. With 21,529,464 units built, the Beetle is undisputedly the best-selling car of our time, which also introduced the individual mobility of the population in the masses. The Beetle stands at the "gas station of the future" for millions of cars of all ages driving on our roads every day today. In the future, these could be operated with e-fuels, be CO2-neutral and at the same time use the existing infrastructure.

At the stand of the Swiss Oil Industry Association, all visitors can try out a first step into the fuel future and refuelling with hydrogen on a simulator using the Hyundai NEXO Fuel Cell, which is already available from series production.

Also on display will be an e-bike from Linde that runs on hydrogen.

The Swiss Oil Industry Association (Erdöl-Vereinigung) is committed to safeguarding and promoting the interests of its members. The 27 members account for around 95% of Swiss imports of crude oil and petroleum products. Among other things, they operate a network of around 3,400 petrol stations and shops. More information can be found at immer-in-bewegung.ch.

Empa is the interdisciplinary research institute of the ETH Domain for materials science and technology. As a bridge between research and practical application, it develops solutions to the challenges facing industry and society, thus making a significant contribution to strengthening the innovative strength and competitiveness of the Swiss economy.

For 20 years, Hyundai has also been relying on fuel cell technology for electric mobility in parallel with energy storage in batteries. At the beginning of 1998, the company started developing hydrogen-powered fuel cell vehicles. With the market launch of the world's first fuel cell production vehicle in 2013, Hyundai has secured its pioneering role in this drive technology to this day.